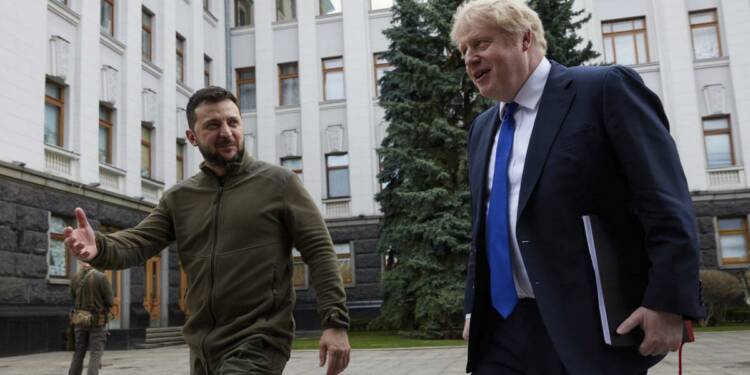 Zelensky has thrown UK Prime Minister Boris Johnson under the bus. In an explosive report published by the Ukrainian news portal Ukrayinska Pravda, officials from the Ukrainian President’s office have been quoted as alleging that peace talks between Russia and Ukraine got halted due to the pressure exerted by an unannounced visit by Boris Johnson to the country on April 9.

According to the report, Johnson came to Kyiv with the avowed objective to “express solidarity” with the war-torn country and extend military and financial aid.

However, the Ukrainian news portal has claimed that during a meeting with Zelensky, the UK Prime Minister asked him not to continue the peace talks that were going on in Turkey. It also claimed that Johnson asserted that Putin needs to be defeated.

The news report seems to echo Russian claims of peace talks getting stalled under Western pressure. Recently, Russian Foreign Minister Sergei Lavrov had alleged that Ukraine stalled the peace talks on the advice of “American and British colleagues”. Putin himself has accused the West of prolonging the war at the cost of the Ukrainian people.

As such, we can see two conclusions emerge from the latest Ukrainian news report-

2. Zelensky knows that he is likely to face a public backlash for prolonging the war and therefore, he wants to find a scapegoat.

Several anti-war groups have already accused the US and the UK of prolonging the war by fanning the flames instead of mediating a solution between the two sides.

On their part, both the US and the UK claim that Russia needs to be defeated and this is why they shipped weapons worth billions of Dollars to the war-torn country.

However, it is quite clear that Russia cannot be defeated in the ongoing war. It is Ukraine that is continuously losing more territory and more people by not negotiating a peace deal with Moscow.

The UK-based Stop the War Campaign observed an “International Day of Action for peace in Ukraine” on May 7.

On Friday, its convenor Lindsey German said that “the British government has become an obstacle to peace in Ukraine by encouraging the continuation of the war through huge arms shipments and incendiary rhetoric.” She further asserted that the conflict in Ukraine is “developing into a proxy war between Russia and NATO.”

For the US and the UK, the war has become a means of economic warfare with Moscow. They are deliberately prolonging the war in order to continue their propaganda against Putin and also for mounting economic costs on Russia. Who is suffering in the process?

Only the people of Ukraine.

Meanwhile, the Ukrainian President has found a good opportunity to scapegoat the US and the UK.

Make no mistake, if Zelensky didn’t want to prolong the war, Boris Johnson couldn’t have compelled him to do so. He is the President of a sovereign country and he could have as well told the UK Prime Minister that I will not let more Ukrainians die because of a proxy war between Russia and NATO.

However, all that Zelensky has done till now is to keep the world and the Ukrainians in dark. With all his propaganda about giving a tough fight to the Russians, he has tried to keep the war alive and avoid a peace treaty with Moscow. And he had a very good reason to do so.

If a peace treaty is signed, Putin could as well say that he wants a friendly man at the helm of affairs in Kyiv. In that case, Zelensky could end up losing political power. Continuing the war, on the other hand, helps him in becoming a heroic figure in the West.

Anyhow, the war will come to an end one day. And on that day, the Ukrainians will seek an explanation from him. So, Zelensky is scapegoating Boris Johnson and saying that the UK Prime Minister didn’t let him end the war. In the process, both Ukraine and the West are getting exposed.

So, we can say, Zelensky has thrown UK Prime Minister Boris Johnson under the bus.

Collection of TOP 31 The measure of a man quotes