Naftali Bennett is about to lose the PM chair, but Putin might come to his rescue 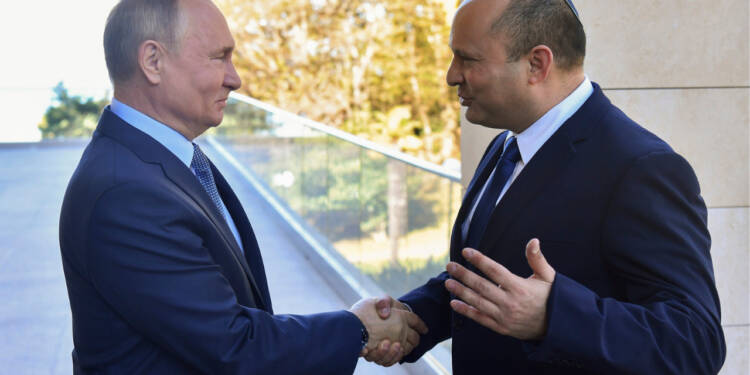 Israeli Prime Minister Naftali Bennett is reigniting the Golan Heights issue. He is executing a December 2021 plan to double the region’s population to 100,000 residents by 2025.

However, the plan couldn’t have gone ahead without Russian President Vladimir Putin’s tacit approval. So, how is Putin concerned with the Israeli plans of solidifying control over Golan Heights and how did he manage to convince Putin for the purpose? Let’s find out.

Bennett’s new push to save his seat

Bennett is currently in a crisis of sorts. The lawmakers in his coalition government have been resigning over religious grounds and other ideological differences.

Naftali Bennett isn’t as popular amongst his core right-wing followers too, due to his association with Arabs and the Israeli left.

What can a politician do to shore up his reputation and augment his dipping popularity? Well, raise a territorial dispute, rake up nationalist sentiment and bring back your voters.

And if you are an Israeli Prime Minister, finding a territorial dispute shouldn’t be all that difficult. Bennett too found one- the Golan Heights issue.

The territorial dispute dates back to the 1960s. In 1967, Israel had conquered the region and wrested its control from Syria during the Six-Day War. The territory was formally annexed by Israel in 1981, even though the world at large hasn’t recognised the annexation.

The Syrian civil war and the activity of Iran-sponsored militia groups like Hezbollah in the region has made control of Golan Heights an emotive issue in Israel. This is exactly why Interior Minister Ayelet Shaked has been charged by Bennett to establish a special committee for planning and construction, in order to bring in new Israeli settlements in the region.

However, establishing its stronghold in Golan Heights isn’t a cakewalk for Israel. Remember, Russia does have a stake in Syria. Putin is friends with Bashar al-Assad though it does cooperate with Israel too in Syria.

Presently, Israel and Russia have a broad understanding of Syria. While Israel pledges to guarantee safety of Russian citizens and military assets in Syria during its air operations on Iran-sponsored militias, Russia promises not to use its military equipment for repelling Israeli attacks. This mutually beneficial agreement has helped both the countries strengthen their respective positions in the war-torn country.

Israel hasn’t been enforcing its plans to establish more settlements in Golan Heights because of the fear of antagonising Syria and Russia which could disrupt its cooperation with Syria.

In 2018, Russia had even deployed its military police along the Golan Heights frontier in an apparent bid to avoid any escalation of tensions in the disputed region. Earlier this year, when Israel released its first official statement of support for Ukraine, Russia condemned Israeli occupation of Golan Heights and had also said that it did not recognise Israel’s sovereignty over the region.

So, if Israel has to effectuate its Golan Heights plans, then it must take Putin into confidence.

And guess what Bennett may have actually taken Putin into confidence. This may have been a factor behind Bennett government’s decision to refuse providing defensive weapons to Ukraine including the Iron Dome and accepting wounded Ukrainian soldiers for rehabilitation.

Israel’s message to Putin is clear- we will not help Ukraine if you let us go ahead with our plans in Golan Heights.

We seem to understand that Russia may have accepted Israel’s message. Till now, we haven’t seen any knee-jerk reaction against Bennett’s Golan Heights push.

And what about Syria? After all, Syria is the one that claims sovereignty over Golan Heights. Yet Bashar al-Assad understands that the main threat facing his country is Turkey’s invasion plans in Northern Syria and not Israel’s plans to strengthen its de facto control over Golan Heights.

In order to push back against Turkey’s invasion plans, Putin has been coalescing Syrian government, Russian and Kurdish militia forces. The Bashar al-Assad regime must be happy to nip the Turkish invasion plans in the bud. It won’t bother much about Israel’s Golan Heights ambitions now. For Bennett, this becomes an unprecedented opportunity to save his seat.

Merkel has a message for Germany and the rest of Europe, and it makes sense