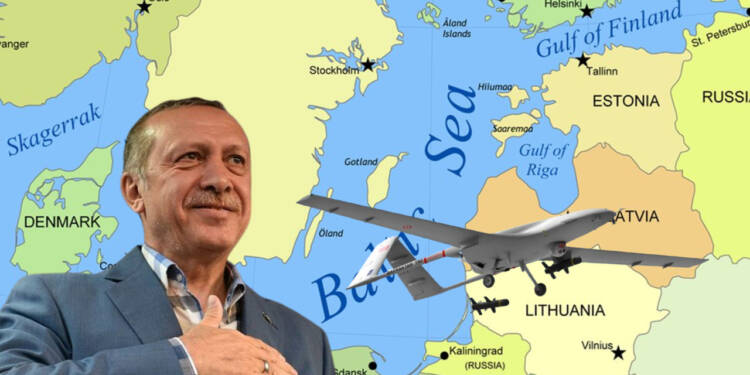 Recep Tayyip Erdoğan has started flirting with danger. He has now sensed a crisis in the Baltic Sea and is trying to tap into the region with his agenda of making Turkey the leader of the Islamic world.

The US and Russia coming face-to-face

After the Ukraine war, the Baltic States of Estonia, Latvia and Lithuania have become somewhat restless and worried. They fear that they might face some sort of Russian aggression after what happened to Ukraine. Their fears are quite legitimate to be precise.

Recently, 16 NATO allies and two NATO partner nations, Finland and Sweden, conducted the exercise Baltic Operations (BALTOPS 22) which consisted of over 45 ships, over 5 aircraft and 7,500 personnel. Code named “Hedgehog”, the drills were one of the biggest ever NATO exercises in the Baltics.

In response, Russia conducted a major drill in the same region. Russian Defence Ministry said that Russian warships are conducting drills in the Baltic Sea. The exercise reportedly involves around 60 surface warships, 45 helicopters and aircraft, and some 10,0000 soldiers. Practically, NATO and Russia are coming face-to-face in the Baltic Sea region.

Even as the Baltic Sea region is heating up, Turkish drones too seem to be getting involved. Lithuania was crowdfunding for Turkey’s Bayraktar TB2 drone amidst the ongoing Russia-Ukraine war. However, Turkey just told Lithuania that the drones are for free.

A Turkish defence contractor has reportedly decided to donate the $6m armed unmanned drone to Lithuania. Lithuania’s Defence Minister Arvydas Abusaukas tweeted, “It is unbelievable, but Turkey just agreed to give the Bayraktar that Lithuania gathered money for free!”

This is a surprise move on Turkey’s part and this is where the plot thickens.

Erdoğan has sensed a faith crisis

So, why is Turkey giving away its prized unmanned combat drone for free to Lithuania? It isn’t as if Turkey doesn’t need any money. The Turkish economy is actually in a state of crisis and Erdoğan does need some foreign exchange to bolster his country’s economy.

Well, the Turkish President has some larger plans for the region. He has sensed a faith crisis in the region. Remember, the Baltic countries are in a state of ambiguity and confusion. On one hand, they face Russia’s sabre-rattling and on the other hand, they have no one to rely upon. Yes, they did hold a major exercise with NATO but then Russia also held a huge exercise. The Baltic countries are restless but they also do not want to provoke Putin because of what he did to Ukraine.

Such moves are also likely to sway the European public’s attitude in Turkey’s favour, at a time when Turkey is demanding that Sweden and Finland adhere to its legitimate national security concerns in exchange for Turkey’s agreement to join NATO.

Consequently, the Baltic countries are yet to figure out a strategy for responding to the ominous threat that they are facing. They are also deterred by the incompetence of the West, given how NATO and the US sacrificed Ukraine instead of standing up to Russia.

So, Erdogan feels that he has an outside chance to strengthen Turkey’s position in the region and to shore up its influence. At the end of the day, Erdoğan has some higher ambitions including creating a Turkish Caliphate that extends to other parts of the world. He is tapping into the faith crisis in the Baltic Sea region as a part of the same strategy. Whether he fails or succeeds is a different matter. However, the fact remains that he has sensed the faith crisis amongst Baltic countries.