On the instruction of President Joe Biden, IDB has been giving nightmares to the Caribbean, saying their economy will fail in the upcoming years 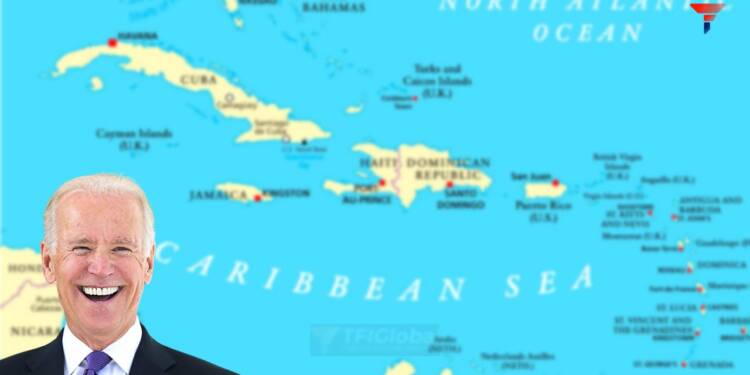 IDB Caribbean report: To maintain the shadow of the USA’s dominance in the Caribbean, Joe Biden has once again deployed the flawed institution, Inter-American Development Bank (IDB), to manipulate the island nations into believing that their economic performance has dwindled and need to rely on the US for assistance and guidance. Further indicates, towards Washington exploiting its relationship to satiate its political, diplomatic, and economic agenda in the future.

Lately, Caribbean nations’ actions have reflected an anti-US stance. To begin with, Grenada, an ally of the US, criticized the US for the imposition of an economic and financial blockade on Cuba. While speaking at a session in the Cuban parliament session for the 18th anniversary of the Bolivarian Alliance for the Peoples of Our America People’s Trade Agreement (ALBA-TCP), Prime Minister Dickon Mitchell, condemned Washington for putting the island nation on its list of terror states.

Continuing with the anti-US trend, the government of Trinidad and Tobago has begun the procedure of extraction of gas with the help of two Western companies, BP and Shell. This has infuriated a desperate Joe Biden given that it is likely to disrupt the monopoly the US enjoys over Europe’s gas supply.

In addition, Mia Mottley, Prime Minister of Barbados, called out rich and powerful nations during the COP27 summit and criticized the US and Europe for failing to meet their promise of providing climate funds to developing countries in Africa, Asia, and the Caribbean. She also stated that institutions like the World Bank have evaded their responsibilities. Parallelly, the Prime Minister also strengthened her nation’s political, economic, and cultural relationship with African nations including Kenya, whose leader William Ruto took measures to annihilate US-backed terror groups such as M23 in DRC.

In response to the economic and diplomatic rise of the Caribbean nations, the Inter-American Development Bank released a report on export sales from the Latin American and Caribbean regions. In the report, IDB emphasized that the region’s export sales significantly declined in 2022, after growing to 27.8% in 2021.

It further stated that in the upcoming period, the export growth will further decrease owing to a range of factors such as a reduction in commodity prices, Russia’s military action in Ukraine, a slowdown in global growth, and restrictive monetary policies. However, IDB also stated that though demand from major trade partners of the Latin American and Caribbean region decreased, export sales to the US increased by 21.3% in 2022.

Contrary to the claims of the IDB report, the Swiss-Dominican Chamber of Commerce and Tourism, which is a non-profit legal entity, stated that the Dominican Republic’s economy is resilient and its economic structure is robust, despite the Ukraine war and the pandemic.

Now, it must be noted that the IDB is a US-funded institution that works to further the interests of the Biden administration. And the US is afraid of the rise of the Caribbean nations. For decades, it has exercised dominance in the region and has manipulated the small island nations into supporting its clandestine agenda.

Therefore, when seeing that leaders like Mitchell and Mottley are initiating a hand of friendship with its primary adversaries such as Cuba and Kenya, and Trinidad and Tobago pursuing plans to become the main gas exporter of the Caribbean, Biden feels threatened. Anytime a subservient nation comes out of the shadow of the neo-colonial trap of the West and becomes self-sufficient, the US gets alarmed.

Read more: The Dominican Republic’s growth model is the one that other Caribbean countries must follow

In this context, the IDB’s subsequent step will be giving financial grants to Barbados, Grenada, and Trinidad and Tobago. It has already done so, as lately it gave a US$100 million grant to Barbados to consolidate its fiscal management and an US$80 million aid to Trinidad and Tobago for the enhancement of its water security and supply. These grants are simply bribes by the IDB Caribbean export report on the instructions of Biden and his allies intended to persuade the Caribbean states aiming to not sever ties with the US. However, it is already visible that Barbados, Trinidad, Grenada, etc. are aware of the shallow promises of the West and are treading with scrutiny on the ladder of the geopolitical arena.