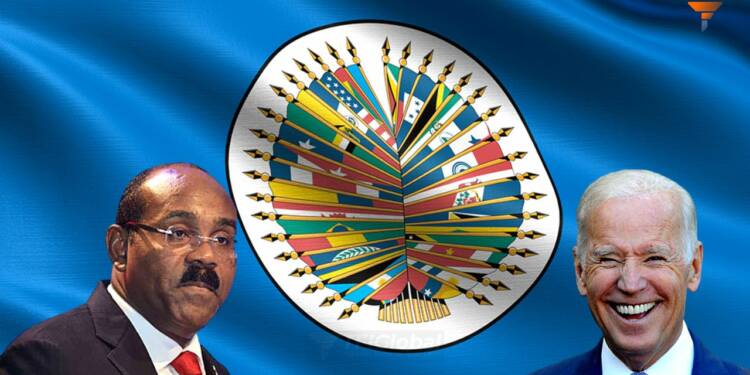 The Organisation of American States (OAS), is an international organisation which claims that its purpose is to foster and promote political and economic ties between its members. The OAS is financed by the US government.

But if there is anything for which the Organisation of American States is in the news, it is getting involved in the internal matters of other nations at the time of elections.

Speaking of Dominica, its government of prime minister Roosevelt Skerrit operates on the instructions of the Biden administration. The ruling party, Dominica Labour Party (DLP), has usurped the political scene for twenty two years, while Skerrit has been in power for nineteen years.

The culture of political repression and electoral fraud has resulted in opposition parties repeatedly calling on the government to implement electoral reforms. The primary opposition, United Workers Party (UWP) even asked Skerrit’s regime to declare the results of ten constituencies of the last general elections null and void.

However, the government of Skerrit has not done the same. And when, the OAS’s electoral mission was sent unfortunately, the Dominica Labour Party (DLP) managed to secure 19 of the 21 seats of parliament.

Despite the absence of a healthy opposition party in the elections, the Organisation of American States (OAS) didn’t saw any irregularities in Dominica. This puts its credibility under scanner.

Read more: St. Maarten to Dominica, from 2014 to 2022 : how Democracy was murdered in the Caribbeans

Similarly, in 1989, Panama’s government condemned the Organisation of American States (OAS) for unlawfully interfering in its internal affairs. The Democratic Revolutionary Party also stated the the OAS violated its constitution.

In a statement, the then ruling party Democratic Revolutionary Party stated, “Our glorious party will never accept any type of interventionist resolutions or attitudes which try to solve problems or situations for which Panamanians alone are responsible.”

But even after three decades, the OAS’s illegitimate actions have not stopped. On the contrary, they have escalated. On 14th January, it announced that it will be sending its Electoral Observation Mission to supervise the upcoming general elections in Antigua and Barbuda.

The mission will study voting lists, examine political finance, electoral machines and monitor the overall arrangement. The Mission, which will have eleven experts and observers, will be headed by Bruce Golding, former prime minister of Jamaica.

It must be noted that this mission is being funded by Biden, Lu da Silva and Trudeau apart from The Netherlands, Korea etc. Canada’s involvement in the Caribbean, particularly in Haiti, has intensified lately. The assassination attempt on one of the critics of Ariel Henry demonstrates that Canada can go to any extent to fulfill its wicked agenda in the Caribbean nations.

Apart from Biden and Trudeau’s involvement in the internal affairs of Antigua and Barbuda, another distressing aspect regarding OAS’s electoral mission is that it is being headed by Bruce Golding.

Golding is certainly not the right person for this task as his own track record is marked with notoriety, corruption and falsehood. In fact, he protected a Jamaican drug kingpin, named Christopher Coke, who was facing extradition to the US on drug trafficking and gun charges. Golding was heavily condemned for contracting a law firm to influence the US government to drop its case against Coke.

Several political analysts stated that had it not been for Christopher Coke’s backing, Golding would not have been elected to parliament. Eventually, the controversy compelled the disgraceful Jamaican politician to step down as the prime minister.

One can imagine the credibility of OAS’s election mission in Antigua and Barbuda if it is being headed by a deplorable man like Golding. It must also be taken into account that Golding belongs to the current ruling party, Jamaica Labour Party, which is leaving no stone unturned to fulfil the desires of Biden. Hence, Antigua and Barbuda’s government need to reconsider its decision regarding the Organisation of American States (OAS) otherwise it will be looking at an election which will be dominated by deceit and fraud not the hopes and ambitions of people.

State some 10 economic benefits of rivers and lakes