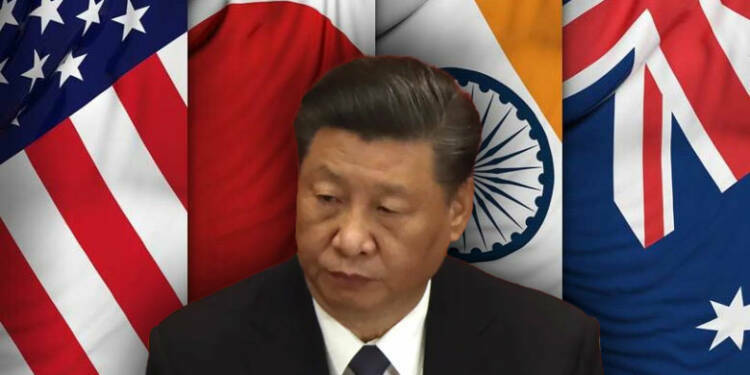 China’s biggest nightmare is here, as the four QUAD nations- India, Australia, Japan and the US, are fast turning out to be the Four Housemen of an anti-China apocalypse. The QUAD, which is seen as an informal, anti-China strategic forum in the Indo-Pacific, has now swung into action. It is leading the free world’s tirade against the paper dragon. Till now, the QUAD was more or less in its nascent stage, but now it is becoming a full-fledged alliance system.

In fact, the QUAD has kickstarted the alliance doctrine of picking up every possible matter against its common adversary- the People’s Republic of China and turn it into a QUAD v China contest. QUAD has taken on China in Africa, Southeast Asia, South Asia, the Pacific Island region and Oceania. The QUAD intends to obliterate growing Chinese influence from the face of the planet or at least the broader Indo-Pacific region.

In fact, ever since the US-led free world started decoupling from a Communist-authoritarian China, it became clear that the QUAD would have to take the initiative forward. Today, QUAD’s markings are visible every time China gets humiliated in any part of the world.

Take South and Southeast Asia for instance. These two regions carry considerable strategic importance today owing to their centrality in the Indo-Pacific region. The paper dragon was trying to asymmetric military and economic influence in both these regions, but then the QUAD came in.

Presently, the American, Australian and Japanese Navies have been teaming up for naval exercises in the hotly-contested South China Sea. India itself has shown the intent of playing a role in the disputed waterways of South China Sea.

As for the Indian Ocean Region (IOR) and South Asia, the QUAD is expected to come together very soon for the next Malabar Exercise very soon that is likely to be held in the Bay of Bengal and the Arabian Sea. There can be no bigger signal of a QUAD v China contest, than the QUAD taking up an entirely military appearance in the IOR.

Apart from power projection, the QUAD is also ramping up its diplomatic and economic foothold in a clear bid to kick China out of the two regions. India, the US and Japan, for example, are snatching Bangladesh away from the paper Dragon. Similarly, India and the US are also looking to pull Colombo into their own axis and kick out China. In the case of Maldives, the US and India are as it is, becoming increasingly influential at China’s expense.

As for Southeast Asia, the entire QUAD has focussed its energies on Vietnam- the fastest-growing Association of Southeast Asian Nations (ASEAN) economy. At the same time, the QUAD members have kept increasing engagement with other Southeast Asian nations like the Philippines, Indonesia, Malaysia and Myanmar.

And then the QUAD members also share a very special relationship with Taiwan. As such, there has been greater willingness to annoy Beijing by engaging Taiwan more closely despite the Chinese government’s insistence on near-religious observance of the ‘One China’ policy.

The QUAD policy of using the South China Sea dispute and other issues to turn ASEAN against Beijing has worked wonders. Today, China finds it hard to placate an increasingly hostile Southeast Asia. And the QUAD is gaining diplomatic influence in the region by marginalising the paper dragon.

In other Indo-Pacific regions also, the QUAD is giving literally no breathing space to China. Take the Pacific Island region- a vast maritime zone stretching from Easter Island in the east to Hawaii in the north to New Caledonia and Palau in the west to Tonga in the south, for example.

China was gaining predatory control of the tiny islands scattered throughout the vast Pacific Island region. However, the QUAD has also come into the picture and has started empowering strategically located island nations like Palau that have shown the intent of taking on China despite their small size. The message is loud and clear- the QUAD will not let China spread its tentacles.

Similarly, in the Oceania region, Australia has managed to convince the Papua New Guinea of the inherent dangers involved in Chinese engagement. And therefore, Port Moresby has started drawing a safe distance from the paper Dragon.

Finally, in Africa, the US, India and Japan have managed to undermine China’s imperialistic ambitions. Till now, China was looking to grab hold of the resource-rich African Continent through debt-traps. But now the three QUAD nations- India, the US and Japan have started creating viable and safer alternatives as against predatory Chinese investments, in a bid to woo Africa away from China.

The QUAD is therefore ready to take up every possible issue concerning China and go as far as humbling China by engaging with Beijing’s adversaries and enemies.