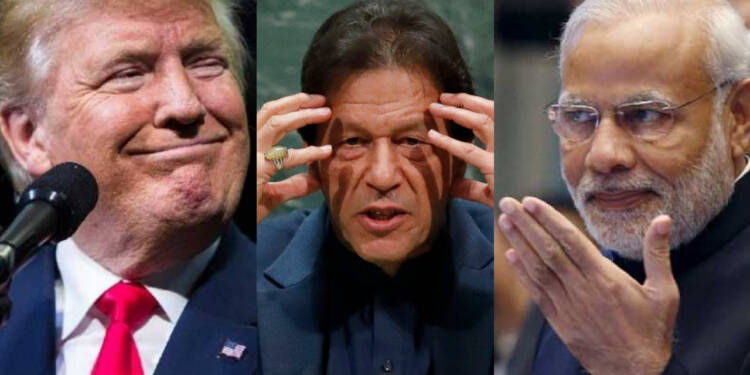 Pakistan has descended to underhand tactics to deter India as it looks to blackmail the United States and other foreign actors involved in the Afghan Peace process to stop India from launching ‘surgical strikes’ on terror launch pads in Kashmir.

The failed Islamic state of Pakistan is dearly holding on to its only leverage with the West. It wields substantial influence on the Taliban and has therefore become a key cog in the Afghan peace process. Alas, Pakistan also acts as a haven and a breeding ground for terrorists and thus is subjected to surgical attacks from India which target their terror launch pads. And, now by directly pleading to the US and other countries involved in the peace process to stop India, Pakistan is trying to protect its terror camps and once again become a haven for terrorists.

During a televised news conference in the UAE, Shah Mahmood Qureshi, Pakistan’s Foreign Minister, who is on a two-day visit for talks with senior UAE government officials, accused India of “planning a surgical strike against his Islamic nation”.

He did not provide any substantial evidence supporting his argument, but he quoted reliable intelligence on the alleged plot. He said that Pakistan was completely willing to respond to such an Indian attack, which he said, might threaten the region’s peace. Qureshi also said an Indian strike could threaten Pakistan’s ongoing Afghan peace process.

The Taliban and the representatives of the government of Afghanistan are negotiating in Qatar since September to attempt to conclude a peace agreement ending the war, with Pakistan having a significant influence on them.

Echoing Qureshi’s concerns, Imran Khan’s Advisor on National Security, Moeed Yusuf, later Friday tweeted that the world must prevent India from destabilizing the region in its attempt to divert attention from its domestic trouble.

Pakistan has lost all leverage with the western powers as it has become a Chinese dominion. Moreover, failing to control breeding terrorism, it is being cut off from almost all help extended by the United States.

Pakistan’s ally Turkey is reeling under the pressure of sanctions by the United States and is also being contained diplomatically in its backyard by India and in the Middle East by Saudi Arabia and the US.

Moreover, Pakistan’s tactics to get closer to Erdogan have irked Saudi Arabia, which has pulled back all support and now responds to India’s cause in Kashmir.

Read More: ‘Rectify or else,’ France hit out so strongly at Pakistan over a minister’s remarks that Pak backed off immediately

Therefore, Pakistan’s move to threaten the Afghan peace process is a diplomatic suicide as it has now played in the only leverage it had with the western powers. Amidst rising tensions in the South China Sea and the Indo Pacific, and Trump pulling out troops in Afghanistan can leave Pakistan high and dry over the Kashmir issue, where Pakistan has lost the plot as other countries decline to address the situation.

The Imran Khan government has been under constant criticism for failing to address the domestic economic issues and more profoundly have been chastised for its failure to keep the terror sponsored activities from the Pakistani territory in check.

While cross border terrorism and ceasefire violations keep rising, India will and can order fresh ‘surgical strikes’ to protect its territory and its citizens from distasteful activities that emanate from Pakistan.

Thus, while Pakistan uses blackmail tactics to threaten the United States and other western powers over the Afghan Peace process to deter India, it must realize that India’s importance in the International structure has risen exponentially. It is evident that India now commands a greater role and position to safeguard peace and freedom in the contemporary world.

To hide its failed policies, China blames its youth for its massive debt crisis