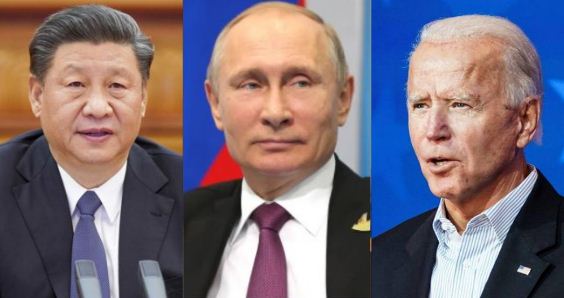 Ever since Biden was declared elected as the next US President, the Putin administration in Russia has started changing its behaviour. Putin is preparing for a Russia-obsessed, Democrat President in the White House. Putin was looking to make a common enemy out of China while President Trump was in control of US foreign policy, but now with Biden’s imminent accession, Putin is using China as a threat to deter Washington.

Of late, Sino-Russian bonhomie has escalated. Foreign Ministers of the two nations pledge co-operation, Russian and Chinese fighter jets fly together for a joint patrol and Russian diplomats criticise the Indo-Pacific concept. However, contrary to popular opinion, Putin is ostensibly warming up to China, not because of ideological semblance, but because he wants to give some unsubtle messages for the incoming US President. Russia is with China just for the optics, and Putin’s real target is Washington.

In fact, Global Times, a Chinese state-run publication has predicted, “China-Russia strategic ties to be strengthened, sending strong signal to new US govt.”

Global Times is a Chinese Communist Party (CCP) mouthpiece and therefore obligated to celebrate every global development as a Chinese victory. Nevertheless, the CCP mouthpiece reported, “Russia feels the threat from the US will be increased, so it wants to warn the US and its allies, to deter potential provocations from the West.”

And if Biden’s poll campaign is any indication, we do know that the Democrat considers Russia to be a security threat and China just a competitor. Also, Biden is an ideological friend of the European Union (EU) and once in power, he is expected to repair US ties with the NATO and EU. Consequently, the level of military deployment in Russia’s west could go up.

With Trump in power, Putin knew that the anti-Russia NATO was getting undermined, but now Biden brings in an uncertain future. So, the Russian President needs some sort of deterrence against a resurgent NATO, and Putin seems to look at China as just the right kind of deterrence.

More importantly, Putin is concerned about Biden’s plans to impose sanctions on Moscow. The Russian economy has faced a wave of relentless sanctions from a Germany-led EU, as well as the US, on issues like Crimea invasion. Now, with Biden in power, Germany might encourage the Brussels and Washington to impose coordinated sanctions on Moscow.

Putin, on the other hand, will keep playing up the threat of creating a military alliance with China. However, a formal Sino-Russian military alliance isn’t going to materialise as Chinese and Russian interests themselves militate against each other. Yet, every time Biden or the EU try undermining Moscow, the Kremlin will threaten to join an evil China and destabilise the entire world.

Putin is sending feelers to China, and Xi might even be falling for them. But Moscow’s real messages are to Biden. The Democrat is being advised to keep his hatred for Russia in check or else a Sino-Russian axis will lead to a crumbling world order.