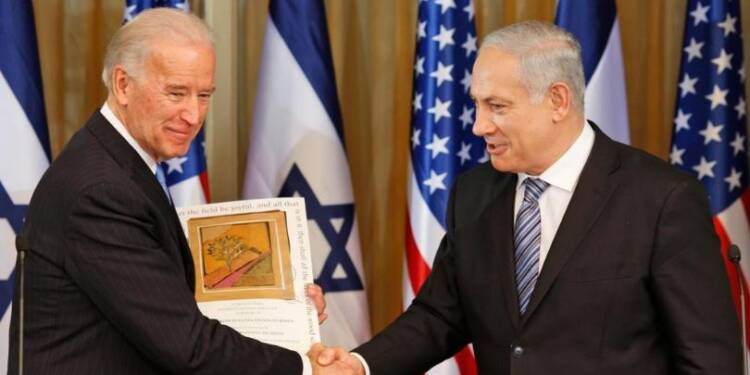 Joe Biden and his administration at Washington has been hounding Israeli Prime Minister Benjamin Netanyahu for more than a month since coming to the office. Be it calling him late, shying away from terming Israel as a strategic ally, placating Iran or restarting the aid to Palestine, Biden has done everything in his power to alienate Israel. But now, the Biden administration has come up with a goodwill gesture.

Vice President Kamala Harris, in a call with Netanyahu on Thursday, reaffirmed the US opposition to an International Criminal Court probe of possible war crimes in the Palestinian Territories, the White House said. The call, the first between the two since Harris and President Joe Biden took office in January, came a day after the ICC prosecutor said she would launch the probe, prompting swift rejections by Washington and Tel Aviv.

This gesture of goodwill comes after over a month of deteriorating ties between the two long-standing allies. As soon as Biden came to power, he was unduly harsh on Washington’s only non-Muslim democratic ally in the Middle East, Israel. He avoided making a telephone call to Netanyahu, pandered to Israel’s existential threat- Iran and tried reinvigorating the Palestinian cause. However, the growing threat of an Israel-Arab axis which makes the utility of US presence in the Middle East non-essential has made the US administration backtrack its month-long pressure tactics on its own ally.

Recently the Biden administration had shied away from calling Saudi Arabia and Israel as its close allies and the fact that Israeli PM Netanyahu was one of the last foreign leaders who received a call from Joe Biden only widened the wedge. While the initial hesitation of communication with Israel was dubbed on Biden’s yet to be devised ‘Middle East policy’, but going by the media reports swirling around, it became more plausible that the Democrats were scheming a plot to ensure that Benjamin Netanyahu does not get re-elected in the upcoming elections. And all this was, just because he hugged former President Donald Trump and had an excellent personal camaraderie with him.

Now realising the threat of the influence of the USA vanishing from the Middle East, the Biden administration has finally relented on its disastrous foreign policy vis a vis Israel. Harris and Netanyahu noted their governments’ “opposition to the International Criminal Court’s attempts to exercise its jurisdiction over Israeli personnel,” the White House said.

It came a day after the ICC prosecutor said that she would launch the probe, prompting swift rejections by Washington and Jerusalem. In December 2019, prosecutor Fatou Bensouda, who will be replaced on June 16 by a British prosecutor Karim Khan, said that war crimes have been or were being perpetrated in the West Bank and Gaza Strip. She named the Israel Defense Forces as well as armed Palestinian groups like Hamas as potential perpetrators.

The realisation has dawned on the United States that placating Iran and re-hyphenation of the Israel and Palestine issue will have a very dangerous impact on the larger US influence in the Middle East. The Democrats have realised that partisan political point-scoring will deteriorate the US-Israel bilateral relations beyond redemption and have stepped back to the normal bilaterals.

The call ended on a good note as Harris also congratulated Netanyahu on Israel’s coronavirus vaccine programme and they agreed to increase cooperation on the coronavirus, water, green energy and other initiatives, the White House said.