‘No discussion on falling stocks,’ Chinese govt bans discussions on the poor state of China’s economy 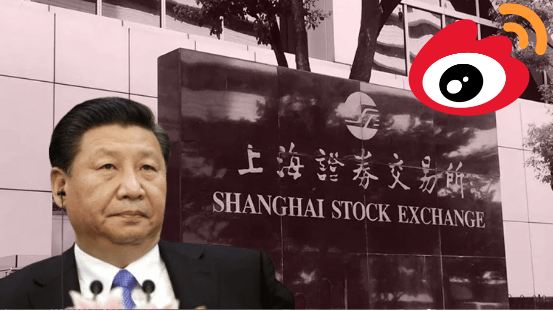 The Chinese stock markets were recently hitting record highs. Now, they are hitting record lows. This, is an apparent indication of the fragility of China’s financial systems, and in general, the ill-health of the Chinese economy. The recent slumps are being credited to concerns that equities are overvalued and exposed to the impact of rising US bond yields. According to Markets Insider, China’s CSI 300 index, which tracks the performance of the top stocks on the Shanghai and Shenzhen exchanges, fell to its lowest level since December 22 on Tuesday. Stocks keep rising and falling around the world. They also crash at times. But only in China is talking about the stock market slump censored by the Communist government.

Bloomberg reported that searches for the Chinese equivalent of “stock market” on Weibo, the country’s Twitter-like platform, produced no results on its web version on Wednesday, making it seem as though the phrase was censored. The report added that Weibo users could still post using the term “stock market” and the app’s mobile-version seemed to display them if hashtags weren’t included. Searches for posts including words that mean “plunge,” “A-shares,” and “stocks” worked early in the day.

Effectively, Chinese citizens – already deprived of the free worldwide web are now being forced to not even talk about the freefalling Chinese stock markets. The Chinese Communist Party really does not cease to surprise the free world order with the levels it is willing to stoop to in order to censor the voice of its citizens, and muzzle their opinions on issues of national and international importance. Xi Jinping and his minions must remember that censoring talk and conversation relating to the stock market crash or dilapidated economic situation of China will in no manner help the country strengthen its financial position.

Recently, Chinese major company Bilibili, backed by Sony, Tencent Holdings and Alibaba Group Holding, raised $2.6 billion from the initial public offering, but has become the latest victim of China’s economic downturn. Shares of the online video streaming site fell as much as 6.8% in their Hong Kong debut on Monday, joining a series of recent disappointing listings in the city. With no solution in sight, China has resorted to banning its citizen from making any educated opinion on the condition of stock market.

The CCP, thus, will only end up angering the citizens of China more than they already are. It must be remembered that Chinese citizens are force-fed lies of the country’s economy faring very well, and recovering from the shocks of the pandemic better than any other global economy. Such perceptions are only aided when institutions like the IMF and the World Bank give out healthy growth forecasts for the Communist country. So, when there is a sudden slump on the stock markets, or other economic parameters start behaving abnormally, the Chinese people cannot help but wonder what caused such anomalies.

Read more: China’s focus is now on rebuilding the economy and not growing it, so the tall tales about China’s quick recovery are lies

And then comes the great grand censorship drive of the CCP, virtually covering up all that the Chinese people have a right to know about the health of their economy. A financial crisis which China has publicly failed to acknowledge continues to loom over the middle kingdom. After all, much of the online lending business had started yielding bad debts for China. The inability of the country’s youth to repay their debts has forced the CCP to take drastic measures to save the already struggling economy of China, apart from a global embarrassment of ‘China’s growth’ in fact, being driven by bad debts. Yet, the repercussions of cracking down on the fintech sector of China can prove to be disastrous for the CCP, as domestic consumption is expected to crash. While Xi Jinping focuses on infrastructural spending to revive the Chinese economy, he is curbing the ability of Chinese citizens to spend.

Chinese banks are drowning under the tremendous stress of bad debt. Companies are going bankrupt and shutting shop due to their inability to keep themselves afloat. Yet, China continues to fabricate its growth data. What all of this yields collectively, complemented with a financial crisis ever-looming over China, is a stock market freefall witnessed recently.

China painting a rosy picture of its economy and financial systems is beginning to result in an unmitigated catastrophe for the CCP. While its propaganda can relieve the pain in the short run, an economic system built on a foundation of lies, deceit and coverups cannot be stopped from unwinding and ultimately collapsing, as is beginning to happen now.