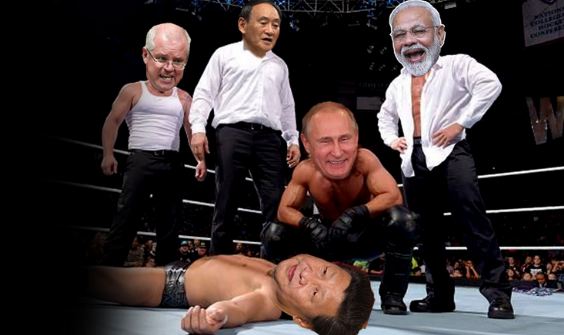 After having been poked in the eyes by Japan on the Taiwan issue and by India on the Tibet front, CCP General Secretary Xi Jinping is all set to be haunted by Russian President Vladimir Putin, because it seems Moscow has decided its stand on the Taiwan issue, and none of it is good news for Beijing. The Tokyo Olympics 2020 have become a ground for Taiwan to flex its muscles and soft power before the entire world community. With every passing day, a growing number of international media outlets are referring to Taiwan by its name, instead of the “Chinese Taipei” used in the past.

Now, a Russian government-owned media organisation – RIA Novosti has caught the public eye for showing Taiwan’s national flag on its online medal table, instead of displaying the white plum blossom banner for Chinese Taipei. The Russian state-owned media outlet is joining the growing list of international news agencies that have “rectified” the name for Taiwan or its flag in Olympic coverage.

It is almost as if Japan, India and Russia have formed a trilateral alliance against China, aimed at the protection of Taiwan and the liberation of Tibet. Consider this, Japan has been pursuing a stringent anti-China line for quite some time now, and most recently, has even committed to protecting Taiwan militarily if the need arises. Most recently, former Japanese Prime Minister Shinzo Abe also stressed on the need to preserve a free Taiwan and prevent it from being turned into the next Hong Kong. He has also promised to visit Taiwan soon.

Already, Japan is profusely hurting Chinese sentiments at the ongoing Tokyo Olympics. NHK, which is Japan’s public broadcaster had one of its anchors introduce Taiwan’s team as “Taiwan” instead of the obligatory “Chinese Taipei” at the opening ceremony of the Tokyo 2020 Olympics. Furthermore, as the country began to win medals at the games, Taiwanese netizens noted that NHK’s medal table on its website listed the team as “Taiwan” (台湾) in Japanese Kanji. China was visibly quite irritated, and called such happenings as “tricks”.

Effectively, Russia is also now, according to China, “playing tricks” by having its state-run media display Taiwan’s national flag on its online medal table. Therefore, Russia has decided to not pay heed to Chinese sentiments, and in fact, bat for Taiwan’s freedom and autonomy, which Beijing is increasingly seeking to trample upon.

Earlier, in January, Russia had included Taiwan in its list of foreign countries ‘eligible’ for its unified e-visa program. According to Taiwan’s Ministry of Foreign Affairs data, Russian visitors to Taiwan totalled 14,927 in 2019, a year-on-year increase of 407.55 per cent. An unprecedented rate of increase of tourists from Russia to Taiwan, followed by Russia’s decision to include Taiwan in its unified visa program was a sign of warming relations. Now, for a leading state-run media organisation of Russia to display Taiwan’s national flag, when it has historically displayed the one approved by China is indeed a sign of Putin making his Taiwan position clear to Xi Jinping.

TFI has also reported that Japan and Russia have stepped up cooperation on the disputed Kuril Islands. Therefore, it is very much possible that as part of that cooperation, Japan has got Russia to agree to step up its pro-Taiwan activism.

Russia is itself not a fan of China. Beijing has been eyeing the Russian Far East and trying to eat into Moscow’s exclusive sphere of influence in Central Asia and the Arctic. Therefore, by playing the Taiwan card alongside Japan, Putin has sent a resounding message to Beijing.

Meanwhile, India is rattling China by flashing the ‘Free Tibet’ card right at the CCP’s face. Recently, Prime Minister Narendra Modi wished the 14th Dalai Lama on his birthday – the first time he has done so publicly after assuming office. This rattled Xi Jinping to the extent that he was forced to visit Tibet and bordering towns with India in order to assert’s China’s hold over the occupied region. The Dalai Lama is the foremost proponent of Tibetan freedom and is currently staying in India.

As a matter of fact, India even arranged for U.S. Secretary of State Antony Blinken to meet a top aide of the Dalai Lama, which again caused the CCP to fume. Therefore, Japan, India and Russia have come together to take on China and ensure that Taiwan’s independence is maintained, while Tibet is given freedom from the clutches of the CCP.