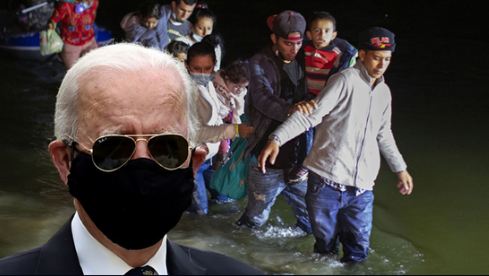 Covid-19 cases are surging in Texas and the state is now facing a fresh wave. Meanwhile, the Biden administration is conveniently putting the blame on vaccine hesitancy in the state. In fact, President Biden has been pushing people to get vaccinated but many Texans are avoiding inoculation due to the side effects of the Pfizer vaccine.  However, lack of vaccination may not be the only cause behind the latest surge of infections in Texas.

Firstly, with Pfizer vaccines, infections have been taking place despite inoculation. Secondly, lack of vaccination may be one cause driving the latest surge of cases, but it is quite insignificant compared to the risk posed by hundreds of thousands of illegal aliens entering Texas via the southern US border. The Biden administration has itself been negligent in its duty to test incoming migrants and no one really knows how many infected people are entering the US.

The COVID surge in Texas is largely driven by unvaccinated Americans — but there's growing concern the migrant crisis may be complicating the issue.@cbsmireya got exclusive access to one temporary emergency shelter, set up to test and treat migrants who have COVID. pic.twitter.com/wZqOMZPOMK

Growing illegal immigration through Mexico into US states like Texas is a consequence of poor border management by the Biden administration. It is primarily due to Biden’s pre-poll promises like legalising as many as 11 million illegal immigrants that hundreds of thousands of illegal aliens have entered the US.

As a result of Biden’s populist illegal immigration policy, over one million illegal immigrants have been stopped crossing the southern US-Mexico border. These illegal immigrants trying to enter the US arrive from several countries including Central American nations like El Salvador, Guatemala and Honduras. Many more immigrants are believed to have entered the US without even having been noticed by the federal agencies.

Since Biden expects states to test the incoming immigrants and the federal authorities don’t test each and every immigrant coming into the US, we can’t exactly say how many infected aliens have entered the US till now. In any case, Texas had to declare a state of emergency after 7,000 infected immigrants arrived there.

The Biden administration hasn’t been able to create an efficient system for handling the immigrants coming into the state. Many immigrants are kept in asylum camps, which are reportedly in poor shape though the mainstream liberal media avoids reporting about them in the Biden era.

Worse still, many immigrants are released from custody into the US by the Biden administration. They are supposed to be released with notices to appear before Courts and such notices mark the beginning of the deportation proceedings.

However, there is a twist in the tale. Axios reported that as many as 50,000 undocumented immigrants have been released into the US by the Biden administration without Court dates. These undocumented immigrants then evaporate into the US and though they are asked to report to an Immigration and Customs Enforcement office, only 13 per cent showed up.

The immigrants entering the US includes all sorts of people- drug traffickers, criminals, gangsters and even those infected with COVID-19. Biden had tried to solve the border crisis by appointing Vice President Kamala Harris as the border czar.

However, all that Biden’s lieutenant can manage to do is laugh without any context and address the “root causes” in Central America, instead of visiting and handling the migrant surge on the southern US border.

The migrant surge isn’t going to end, because Biden has an agenda. He feels that letting in immigrants will ultimately create a strong vote bank of such undocumented immigrants. This is why federal agencies like Immigration and Customs Enforcement (ICE) have been weakened.

However, the biggest consequence of Biden’s border mismanagement is that Americans are being made to suffer in the COVID context. When Texas Governor Greg Abbott announced that he was lifting the statewide mask mandate and capacity restrictions on businesses, Biden had called the decision “Neanderthal thinking.”

However, Abbott had then made it clear that Biden’s migration policies were the real threat for Americans while accusing the Biden administration of releasing Coronavirus-infected migrants into Texas.

Biden’s problem is that he wants the Americans to live a life of restrictions, but illegal aliens will be allowed to evade even COVID-19 tests and roam around freely without any scrutiny whatsoever. This is putting southern US border states like Texas at a big risk. And therefore, we are not at all surprised that Texas is facing a fresh wave of COVID-19 infections.