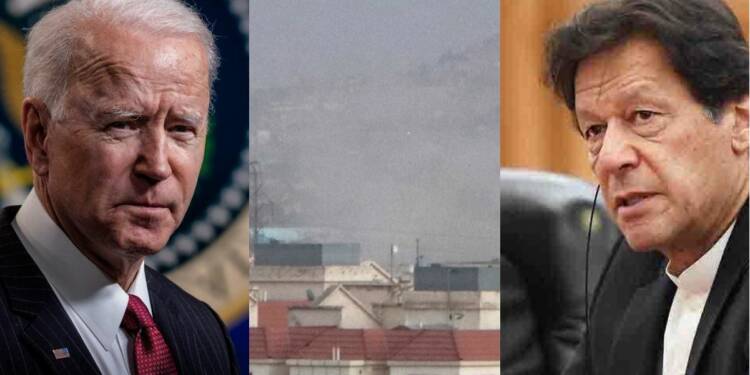 As American troops started withdrawing from Afghanistan, the US did lose the ‘global guardian’ tag owing to the shoddy manner in which Biden executed the process. However, many American families also heaved a sigh of relief. Finally, the US troops were coming home after fighting a 20-year long war thousands of miles away from their homes. Yet not all US troops deployed in Afghanistan were evacuated safely.

A terror attack carried out by the Islamic State in Khorasan Province, ISKP (ISIS-K) at the Kabul airport led to the death of at least 13 US troops. The ISKP suicide attack wasn’t really a surprise and the US intelligence had already warned of the possibility of such an attack. So, the US evacuation process is turning out to be largely unsuccessful for even the military troops aren’t being evacuated safely. Still, Biden isn’t ready to name and shame Pakistan which rubbed salt on America’s 20-year-old wounds.

US President Joe Biden vowed to avenge the death of American soldiers. He said, “To those who carried out this attack, as well as anyone who wishes America harm, know this: We will not forgive; we will not forget.” He added, “We will hunt you down and make you pay. I will defend our interests in our people with every measure at my command.”

In his White House speech on Thursday, Biden also confirmed that the suicide attack at Kabul airport was carried out by the Islamic State in Khorasan Province, ISKP (ISIS-K). But does it stop here? Can we really buy that ISIS-K killed American soldiers all by itself without linkage to Pakistan or even the Taliban?

Biden, on his part, said, “There is no evidence thus far that I’ve been given as a consequence by any of the commanders in the field that there has been collusion between the Taliban and ISIS in carrying out what happened today.”

However, Afghanistan’s caretaker President Amrullah Saleh doesn’t believe Biden. He said, “Every evidence we have in hand shows that IS-K cells have their roots in Talibs & Haqqani network particularly the ones operating in Kabul. Talibs denying links with ISIS is identical/similar to the denial of Pakistan on Quetta Shura. Talibs have learned very well from the master. #Kabul.”

What Saleh has said makes a lot of sense, especially if we examine the nature and consequences of the past attacks carried out by ISIS-K. Last year, the Haqqani Network and Lashkar-e-Taiba (LeT) orchestrated an attack on a Gurudwara in Kabul. However, they allowed the ISIS-K to claim responsibility for the attack. This was seemingly a part of their larger goals to undermine the civilian government and bring the Taliban to power in Afghanistan.

Interestingly, LeT is a Pakistan-sponsored terror group actively supported by the Pakistan Army and the Inter-Services Intelligence (ISI). The Haqqani Network is a Taliban-affiliated terror outfit and is backed by Pakistan’s ISI. Yet, Biden doesn’t bother to blame Islamabad directly or indirectly for 13 US soldiers who were killed mercilessly at the Kabul airport.

Biden is actually showing how he represents the pro-Pakistan lobby in the United States. Make no mistake, the US no longer needs Islamabad because it is withdrawing out of Afghanistan. Pakistan therefore no longer serves as a transport link to Afghanistan for the US. Yet, Biden didn’t even indirectly attribute the terror attack at Kabul to Pakistan.

It isn’t the first time that Pakistani elements have hurt American interests. Even Osama bin Laden, the man responsible for the 9/11 terror attacks, was found in Pakistan’s Abbottabad. Later, Pakistan’s Prime Minister Imran Khan had also inducted Osama’s protector into his cabinet.

Over the last twenty years, Pakistan has actively embezzled US aid money to fund terror groups in Afghanistan which led to the deaths of hundreds of American troops. And even as the US troops started evacuating, a terror group that is directly or indirectly linked to Pakistan killed another 13 US soldiers. Still, the US President hasn’t slammed Islamabad.

There is a growing demand to sanction Pakistan for it is shamelessly and openly supporting the Taliban. Yet, Biden has his priorities clear- blame ISIS-K for the Kabul airport attack and exonerate both Taliban and Pakistan.