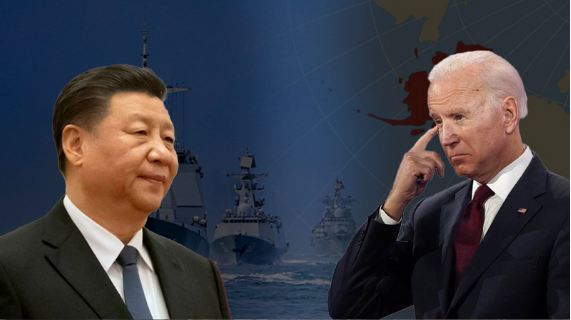 Leave alone giving up on aggression in the South China Sea, China is now looking to intrude American territory itself. China, a sub-tropical country that calls itself “near-Arctic“, wants to intrude its military assets into the fast-melting Arctic. First, China decided to bully Russia, but Putin proved too big to bully for Chinese President Xi Jinping. So, Xi is now targeting the US territory of Alaska with Biden looking incapable of taking on China.

Russia too big to bully in the Arctic

Within the Arctic, Moscow was able to mount further pressure on China by building a fleet of warships to push back against any Chinese aggression, test-firing hypersonic and anti-satellite missiles in the Arctic and reviving a Soviet-era lab to test weapons in the extreme conditions of the Arctic.

For China, entering the Arctic is an indispensable geopolitical goal. Presently, Chinese vessels have to invariably pass through the Strait of Malacca, a narrow passage of water, at the junction of the Indian and Pacific Oceans. The Strait of Malacca is subject to Indian influence and therefore China wants to find an alternative route to Europe and the rest of the Western world via the Arctic.

China has been trying to augment its influence in Alaska for quite some time now. When Xi visited the US in 2017, he stopped at Alaska, and not the Silicon Valley after leaving from the Mar-a-Lago summit with US President Donald Trump. He avoided visiting Silicon Valley, the hotspot of American businesses and announced investments in Alaska’s oil and gas exploration sector instead.

Xi wants to make Alaska economically dependent on China and exploit the strategically situated US state that has a long coastline along the Arctic Ocean.

US President Joe Biden and his administration have shown a disposition to bow down before China.

Even during the Alaska summit earlier this year, Chinese Foreign Minister Wang Yi and Director of the Central Foreign Affairs Yang Jiechi clobbered US Secretary of State Antony Blinken and National Security Adviser Jake Sullivan. The American delegation appeared defeatist and totally disinterested in standing up to Chinese bullying.

Xi Jinping decided to send a group of PLA Navy warships into the USA’s EEZ near Alaska because he was sure that Biden won’t respond in a tough way to Chinese bullying and intimidation tactics. And this is exactly what happened.

The Biden administration hasn’t given a sharp reaction as a fleet of Chinese Navy vessels literally insulted America’s sovereignty. Recently, the U.S. military’s Defense Visual Information Distribution Service, or DVIDS, had released photographs of the Chinese vessels taken on August 29 and August 30.

Captions to one of the photographs stated, “The PLAN task force included a guided-missile cruiser, a guided-missile destroyer, a general intelligence vessel, and an auxiliary vessel.” The DVIDS website removed the photographs later, for reasons best known to the US. However, one thing is clear- the Biden administration has given only a muted response to Chinese aggression.

Such behaviour is only going to encourage China to intrude into the USA’s EEZ more frequently and find ways to mark its presence in the Arctic.

Meanwhile, the Chinese Communist Party (CCP) mouthpiece Global Times went into celebration mode. The CCP mouthpiece stated that if the report of Chinese vessels entering the USA’s EEZ is true, then “activities by Chinese warships are likely a normal far-sea training amid the PLA Navy’s rapid development of such capabilities.”

Global Times added that the incident could be seen as “a countermeasure against US military provocations on China’s doorsteps in the name of freedom of navigation.”

China is therefore looking to justify its expansionism by criticising “freedom of navigation” exercises in the South China Sea, where China claims almost the entire maritime region way beyond its baseline through absurd concepts like historical maritime rights and the nine-dash line. This is again an indication of Beijing continuing its expansionism near the US territory of Alaska.