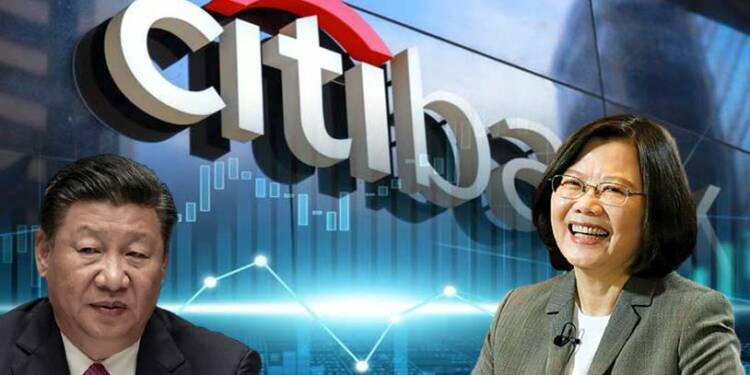 Chinese President Xi Jinping keeps asserting the ‘One China’ principle. He keeps asking the world to not treat Taiwan as a separate nation, even though Taiwan is a truly sovereign entity with a legitimate government and other elements of nationhood. The world at large has stopped listening to him.

Yet, the Citigroup seems to have finally paid heed to what Xi Jinping says about the sentiment of oneness between China and Taiwan. Therefore, when it came to the sale of its Chinese assets in a deal that could raise around $100 million to $200 million, Citigroup picked Taiwan’s Fubon Financial Holding Co. as its preferred bidder.

Chinese banks to lose out on Citibank’s retail assets:

Make no mistake, the loss of Citibank assets to Fubon Financial Holding Co. is a massive setback to the Chinese banking sector. In India, for example, domestic banks like HDFC and Kotak Mahindra are in the reckoning to buy out the US-based bank’s retail assets and add value to their existing customer base.

Citibank’s decision to exit retail banking in 13 Asian markets was actually an opportunity for the local banks to shore up their existing customer base by acquiring the retail assets of the multinational bank. However, in China, Taiwan has simply managed to eat into the cake that the Chinese banks desperately wanted to have.

Why Citibank may have chosen a Taiwanese entity:

Citigroup is not a failed business entity. It is leaving retail business in 13 Asian countries, only because it wants to focus on more profitable ventures like investment banking and to restrict its wealth business to financial hubs in Hong Kong, London, Singapore and the United Arab Emirates. Yet, the American bank doesn’t want to abandon its customers and wants to secure the best possible outcomes for clients. Therefore, it is picking only trustworthy bidders for its retail asset sales. If Citigroup didn’t choose a mainland Chinese entity for selling its retail business, then it really means that the American bank could not find a reliable Chinese bank for the purpose.

But the rot runs much deeper in the Chinese banking sector and the Evergrande crisis is just the tip of the iceberg. China’s regional banks, in particular, have become hubs of insider dealing and corruption. While China’s six big national-level banks and 12 joint-stock banks are predominantly state-owned, the colossal regional banking sector has been influenced deeply by private and vested interests.

Also read: ‘Don’t invest in China,’ Evergrande sends a beautiful message to investors all over the world

Over the past one decade, many of these banks have sold off their ownership to influential private investors to the extent of losing control to them. These shareholders have reduced China’s regional banks into cesspools of bad debts and this is where poor risk management has got institutionalised in the Chinese banking system.

This is actually a major problem for China, as the 134 metropolitan and 1400-odd rural commercial banks in China make up about 32% of the country’s commercial banking sector. These banks hold some $14 trillion in total assets and are almost the size of Britain’s entire banking system.

The effect of China’s bad debt crisis has hit even its state-institutions. Last month, Huarong Asset Management had to be given a $6.6 billion equity injection in bailout. Interestingly, Huarong itself was formed in the late 1990s to manage bad debts. Yet, earlier this year, it was reported that Huarong was meeting its own interest payments with the help of liquidity provided by state-owned banks.

It is therefore not a matter of surprise that the Citigroup couldn’t find a Chinese contender to sell off its retail assets. Taiwan, on the other hand, reposed greater faith in an episode that should bruise Beijing’s ego deeply.