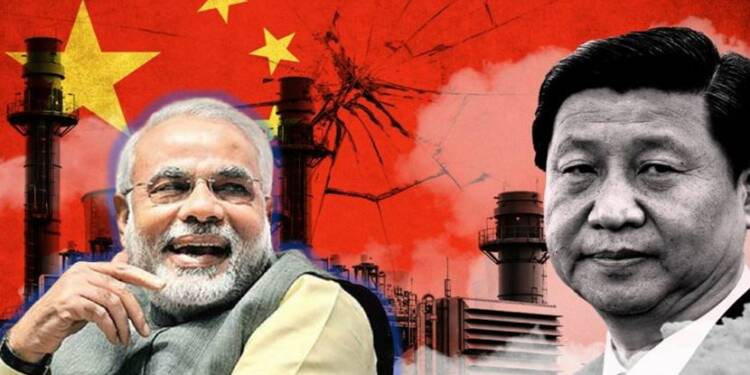 A few years ago, India faced a problem. While everything looked good on the outside, India’s banking sector was crippled with disease. And this disease was the cancer of Non-Performing Assets (NPAs). Loans that failed. Leading to a debt crisis that spiraled.

But thanks to a democratic system that ushered in a new government with a fresh zeal, India did a 180.

Reversing the policy of brushing bad debt under the carpet, PM Modi went all in. Hereon, NPAs were being dugout. The debt mountain kept soaring and the government kept facing the blame for that debt. But that did not last long. Soon the bigger picture got clearer and India had its task cut out to clean up this debt problem before the rot worsened. And long story short, India not only defeated the problem but also created a functional system to stop it from happening again, and this improved the health of India’s banking sector and its economy, greatly.

Also read: To hide its economic downfall from the world, China dons an invisibility cloak

China had two options: take the problem head on or run away from it. China has chosen the latter. It has refused to handle bad loans and has found it convenient to hide its problems.

Ever since the Chinese economic slowdown started and the bad debts problem became apparent, Beijing started slowing things down. It wanted to cool the situation and avoid more improper lending.

In fact, Chinese banks have lowered borrowing costs for the first time in 20 months. The one-year loan prime rate (LPR) was set at 3.8% versus 3.85% in November, according to a statement by the People’s Bank of China- the central bank of the communist nation.

Meanwhile, the five-year loan prime rate, which is a reference for mortgages, has been kept constant at 4.65%. It effectively means slightly lower borrowing rates for strongest companies in China, as Beijing continues to aim for stability after the Evergrande crisis exposed the weak fundamentals of the Chinese economy.

China has a shoddy plan: it will do nothing about the companies that have defaulted or have left their projects midway. The communist nation is looking to support “quality” property developers instead, which will buy real estate projects from large companies that are experiencing difficulties. China is therefore not addressing root issues and is looking at short-term solutions to keep investors in confidence.

Also read: How India fixes massive debt-ridden companies versus how China skewers it

Compare this with India, where Infrastructure Leasing and Financial Services Ltd (IL&FS) — a non-banking financial company (NBFC), or ‘shadow bank’ went down under its own gargantuan debt weight in 2018. The Indian government acted swiftly, did not run away from the problem and a government-appointed board ultimately estimated 61% recovery at IL&FS. On the other hand, Evergrande bonds in China are trading at 25 cents to a dollar.

Also, India relied on other measures to minimise the bad loans problems that the banking sector was facing. The Insolvency & Bankruptcy Code (IBC) for instance enabled a healthy 45% recovery rate, and banks have already recovered a whopping Rs. 13,100 crore from assets sale of big defaulters.

Meanwhile, the bad debts problem in China is way bigger than its real estate collapse. China’s local government debt was officially $3.97 trillion at the end of last year. Experts, once again, feel the true figure is significantly higher. There is also “hidden debt”, which is the result of local governments acting as guarantors for other organisations that borrowed money.

According to Goldman Sachs, “hidden debt” in China could be as high as $8.2 trillion, or over half of the country’s GDP. We are actually looking at Chinese local governments collapsing one after the other. Just like the Evergrande crisis set in a domino effect, the collapse of one local government would also set in a chain effect, which could be even bigger than the one triggered by the Evergrande crisis.

Meanwhile, Xi’s policy of aiming for stability and slowing down borrowing and investment isn’t going to help China hide its problems for very long. Investors in China are already demanding a rate cut. They are betting on a lower LPR amidst an economic slowdown. After all, you can sideline investors only for so long.

Once Xi Jinping buckles to the chorus for a rate cut and eases borrowing, there will be another wave of investments in the Chinese real estate and other sectors. Fundamental issues with the Chinese economy remaining unaddressed, newer investments will lead to new bad debts and create an even more problematic economy. China fled the scene when the debt crisis was mounting, and now, it is facing the consequences of its faulty policies.