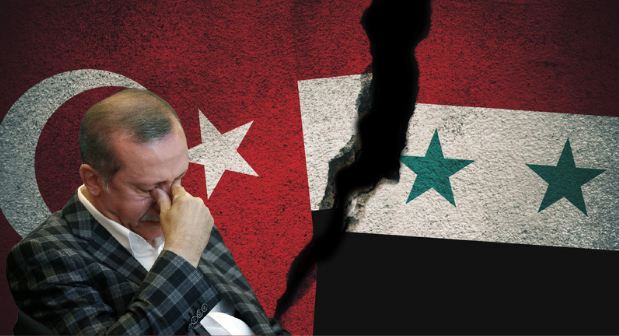 It can break your heart, you know. Investing in an entire country for over a decade to colonise it. Putting in large sums of money into this country. Fighting a proxy war against the country’s government, by arming and financing opposition groups to whom violence is an acceptable norm of dissent.

Syria has been in a civil war for close to 10 years now after Barack Obama’s Arab Spring regime change efforts failed to pay dividends in Syria. Bashar al-Assad emerged as a giant slayer who withstood an international campaign to unseat him from power. Among those trying to get rid of Assad was Turkey.

But Turkey has failed too. And now, it is in no position to continue its proxy war in Syria. It has no money to fund Syrian opposition and jihadi groups. Syrian dissident groups, meanwhile, transacted using the Lira. Did you know that the Turkish Lira was the de facto currency of these anti-Assad groups until recently? But something has changed. What do you think has changed?

Turkey’s support for Syrian opposition groups has been continuous. But now, Ankara finds itself in the eye of a massive storm. Turkish Lira has crashed, owing to the unfeasible and borderline absurd economic policies of Recep Tayyip Erdogan.

The meltdown in the lira has heated the in-house rivalries over financial resources between armed opposition factions and fueled public discontent in opposition-held areas. According to AL-Monitor, the turmoil threatens to erode Turkish-backed militia’s control in al-Bab, Jarablus, Azaz, Afrin, Tel Abyad and Ras al-Ain.

AL-Monitor reported how, in Turkish-backed opposition areas, the internal rifts among the factions under the banner of the Syrian National Army (SNA) are growing amid financial turbulence. The internal rivalry over revenues is nothing new, but they may have reached a point challenging Ankara’s grip over these groups.

The Syrian extremist groups, which just so happen to be the “opposition forces” which Turkey supports, are disenchanted with Ankara after Erdogan shelved plans to launch a renewed offensive against the Kurds, in absence of revenue and a strict-no from Russia and the United States. Factionalism, rivalry and selfish interests are now taking centre-stage among the opposition camp of Syria.

Groups that previously supported each other in exchange for Turkish money and Lira-based transactions have broken up, and are refusing to cooperate.

Turkish President Recep Tayyip Erdoğan is behaving like a true wannabe Khalifa for quite some time now. He is constantly trying to expand Turkish-held territories. In Syria, he wants to take control of more and more regions. That his hooliganism is now coming to a screeching halt is visible to all. Turkey seeks to gain territory in Syria, especially where the Kurdish forces have a significant presence. Additionally, some regions of Syria, like Afrin have provided a constant flow of finances to Turkey and extremist groups backed by it.

AL-Monitor also said in its report that shrinking financial resources amid the turmoil would likely escalate the rivalry, along with the disgruntlement of locals who live in opposition-controlled areas, further complicating Ankara’s command and control efforts on the armed groups.

The Lira crash has ended up choking Turkey’s plans of expanding territory in Syria. And then, it isn’t like the Syrian forces of Bashar al-Assad and his Russian backers are giving Erdogan a red carpet to occupy the land.

Given how Turkey has lost its only leverage in such territories – which is that of Lira being the de facto currency – one can expect Ankara’s interests to take a big hit, and for the wannabe, Ottoman empire to lose all its fortunes in Syria very soon.