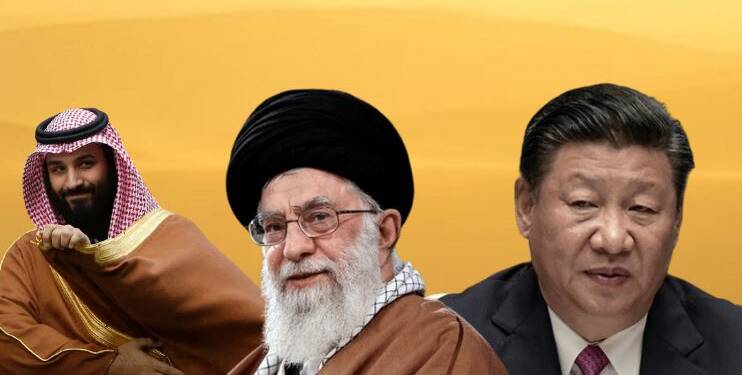 China’s foreign policy makes no real sense. It is driven by just one strategy- throw money and buy allies. But money wins you only partners, not allies. And such a finance-based strategy would go futile, especially in the Middle East.

Chinese President Xi Jinping seems to have realised the hard way during the Beijing Winter Olympics. He was trying to throw money at both Saudi Arabia and its regional rival Iran. Beijing believed that it will win favour with both sides but alas, it has failed spectacularly.

Saudi Arabia was one of the few countries that distanced from declaring a diplomatic boycott of the Beijing Winter Olympics.

A total of 25 heads of state and other leaders were supposed to attend the Beijing Winter Olympics opening ceremony and one of them was Saudi Crown Prince Mohammed bin Salman (MBS). This would have carved out a big opportunity for Xi Jinping to strengthen ties with China’s top oil source.

However, the Saudi delegation backed out at the last minute. The Chinese Foreign Ministry had to find an excuse to save the embarrassment caused. Therefore, it told Nikkei that MBS had to cancel the visit due to a scheduling issue. But the world is not dumb enough to buy the story that the Saudi Crown Prince had a last-minute scheduling issue ahead of such a crucial visit.

Anyhow, this proved to be a double whammy for Beijing. Earlier, Iran had decided to boycott the Beijing Winter Olympics.

The conspicuous absence of both Iran and Saudi Arabia at the Beijing Winter Olympics Opening Ceremony displays China’s failed Middle East strategy. China wanted to keep everyone happy and find goodwill with all big powers in the Middle East. The Communist country signed an agreement to spend $400 billion in Iran over the next 25 years in return for a secure supply of oil to boost its burgeoning economy. It was also trying to ride on the influence of Iranian proxy militias scattered all over the region.

Concurrently, China was also trying to woo Saudi Arabia. It wanted to gift ballistic missiles to Riyadh, to win favour with MBS. Xi Jinping thought that China will become highly influential in the Middle East by working with the two regional rivals- Tehran and Riyadh. But things have panned out differently. As per Middle East Eye, sections of the Iranian political class felt ditched after China decided to develop ballistic missiles with Saudi Arabia. Critics pointed out the “paradox” of calling China “Iran’s strategic partner” while it was arming Saudi Arabia with lethal weapons.

And Riyadh’s decision to cancel its delegation to the Beijing Winter Olympics at the last minute send signals that there happens to be some sense of discomfort in Saudi Arabia too. Tehran is worried about China’s relationship with Saudi Arabia and on the flip side; Riyadh is seemingly worried about China’s relationship with Iran.

China- another big power loss in the Middle East

It is not only China that has failed to win the Middle East. All western powers- including the US, the UK and the EU also have in the past encountered similar backlash with their attempts over this region.

India is the only power that has managed to formulate a workable policy in the region. India managed to cooperate with both Arabs and Iran, only because it looks for mutual benefit and trade rather than attempting to establish its interests at the expense of any regional power. So, no one perceives India as a threat and no one tries to belittle Indias presence.

The big powers trying to establish their hegemony in the resource-rich Middle East region are bereft of any holistic policy. They all have some sort of interest in the region. The US, for example, had oil interests. The EU and the UK had oil and colonial interests in the region. Eventually, their interests conflicted with one or the other power.

Once, your interests start colliding with regional powers, you automatically get lured into long, pointless wars and conflicts. This is what happened during decades of US involvement in the Middle East. The American state instigated several regime wars, hatched conspiracies against dictators and monarchs, and even ended up throwing entire nations like Libya, Egypt and Syria into the mire of civil wars.

For China, things are going downhill in a strikingly similar way to the US. Yes, the Chinese presence in the Middle East is based more on investments, loans and attempts to sell arms, unlike the US. But still, China has visible interests in establishing its foothold in the region like it tried to do with both Iran and Saudi Arabia. But it ended up provoking both, ergo shattering Beijing’s fortunes to conquer the middle east.