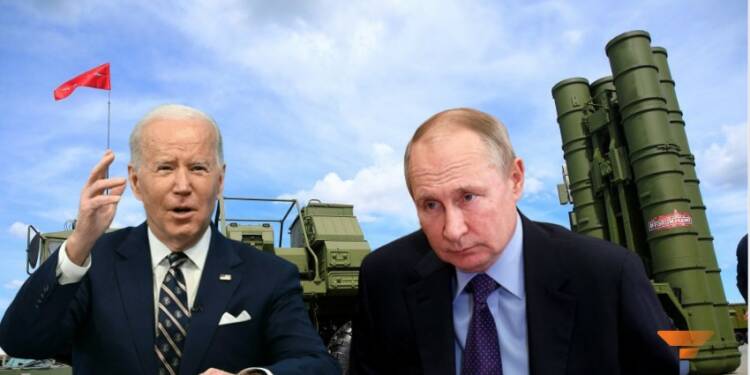 Having triggered a war between Russia and Ukraine does not seem to have satiated Joe Biden and his friends in the American military-industrial complex. So, the White House is now pushing for the whole of Europe to be swallowed by an unsparing and painful war. All of this, while the Biden administration parrots shallow rhetoric of standing with NATO member states and its allies. Now, the Biden administration is pushing Slovakia and Turkey to send their weapons to Ukraine to help the country fight Russia.

On Thursday, Slovakia said it was willing to provide its Russian-made S-300 anti-aircraft missile system to Ukraine, only if its sole battery of the system is immediately replaced by the American THAAD or Patriot Missile System. Slovak Defense Minister Jaroslav Nad said that handing over “the only strategic air defense system that we have in Slovakia” would “create a security gap in NATO.”

U.S. Defense Secretary Lloyd Austin, who was speaking alongside Nad, declined to say whether the United States might be willing to fill the gap.

Meanwhile, Turkey is also being drawn into conflict with Russia by the Biden administration. According to Reuters, the United States has informally raised with Turkey the unlikely possibility of sending its Russian-made S-400 missile defence systems to Ukraine. The Turkish authorities have not commented on the Biden administration’s absurd proposal which will turn Ankara into a hostile state for Russia.

The Biden administration is quite creative. It is trying to work out various mechanisms through which Ukraine can get supplied with lethal weapon systems. Most of this includes asking NATO member states in Europe to send their own weapon systems to Ukraine. However, when European countries ask the White House what will be done to fill the emergent security void in their own territory, Joe Biden’s team goes into hiding.

This is what happened with Poland. It offered several MiG-29 fighter aircraft to Ukraine, provided that the U.S. supply Warsaw with replacement fighter jets. The Biden administration declined the offer in no time.

Now, Joe Biden is trying the same tactics with Slovakia and Turkey. The Biden administration has pretty much declined any replacement weapon systems for Slovakia, and yet, it has the temerity to expect Slovakia to supply Ukraine with air defence systems.

In the case of Turkey, the Biden administration simply wants Ankara to give the S-400 air defence system to Ukraine without raising any questions, and then shut up. It must not expect any replacements from America.

The Biden administration has only one thing to offer to such countries – goodwill. Joe Biden wants these countries to know that their sacrifices will earn them plus points within the White House and U.S. State Department. Little does the septuagenarian know that nobody is excited to be in the good books of Washington anymore.

Why is Biden being so obstinate?

There are two main reasons behind Joe Biden’s aversion to replenishing NATO member countries with American weapons. Countries like Turkey, Slovakia and Poland are neighbours to Ukraine. By getting these countries to give up their weapons and fighter aircraft to Ukraine, Biden wants to give a fighting chance to Kyiv.

However, he is not willing to send high-end weapons into Ukraine himself, because the American defence industry fears getting its toys blown up in smoke rather embarrassingly by Russia’s weapons.

What if Russia obliterates American weapons in Ukraine? What if the THAAD and Patriot air defence systems fail to protect Ukraine against a barrage of Russian air fire? Will such weapon systems have any future around the world if they are proven incompetent on the battlefield of Ukraine?

The fear of Russia exposing American weapons is what has been stopping Biden from sending such systems to Ukraine’s aid.

Secondly, the Biden administration is refusing to replenish Ukraine’s neighbours as well. This is because Russia has shown a propensity of doing the unthinkable. What is to say that Moscow will not expand its military operation beyond Ukraine? In such a scenario, American weapon systems will again be forced to counter a Russian onslaught.

Right now, the priority of the Biden administration is to ensure that major American defence systems do not have to fire shots against Russia. If they do, Russia will take them out, and American defence giants will see their commercial interests collapsing like a house of cards.

Essentially, the United States’ regime is protecting its own interests, even if that comes at the cost of Ukraine’s existence.