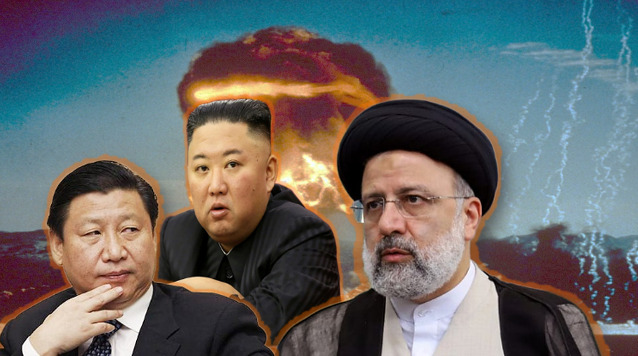 What explains the surge in aggressive actions?

The sudden surge in such aggressive actions finds its roots in the growing friction caused by the Russia-Ukraine war.

The US has been leading sanctions, restrictions, and other forms of economic warfare against Moscow. This is what explains Iran’s decision to fire a barrage of missiles at a US consulate complex in northern Iraq.

On the other hand, Japanese Prime Minister Fumio Kishida too joined the US-led chorus condemning Russia. In fact, Tokyo unexpectedly sanctioned Moscow. This is what again explains North Korea’s decision to test-fire an ICBM in what served as a clear nuclear warning to the Kishida government.

So, we are looking at the creation of two broad blocs- one led by Russia and the other loosely held bloc by the United States.

The growing uncertainty in global security is leading to a multinational war situation. And it is being fought on two fronts- economic and security.

Russia has the clear support of its traditional allies as shown by both North Korea and Iran. Also, Russia could get some help in the form of fighters from Syria and some African countries that remain grateful towards the Kremlin for saving them from regime change wars and coup attempts.

On the other hand, China is also rallying behind Vladimir Putin. There have been reports of Chinese drones being deployed in Ukraine for offensive operations.

Read more: All Russian allies are supporting Putin’s war in Ukraine, but none of US allies is backing Biden

On the economic front too, China is helping Russia. Sino-Russia trade has remained strong despite Western sanctions. Meanwhile, Chinese tech companies have decided to stay in Russia, notwithstanding the exodus of Western companies from the country and a lingering threat of sanctions spilling over to China.

So, rest assured that Putin will get the required support from his partners.

The US-led NATO, on the other hand, seems to be in disarray. Apart from weapons supplies to Ukraine, none of the NATO countries seems to be willing to directly participate in an armed conflict.

The Biden administration, which had instigated Ukraine in the first place isn’t very keen on letting the US enter into the evolving war situation. So, NATO is basically nowhere to be seen.

Other US allies like Japan and South Korea also face a growing North Korea threat and they are likely to stay on the sidelines for now.

At the end of the day, it seems that World War 3 could be around the corner. Or worse, it might have already started.