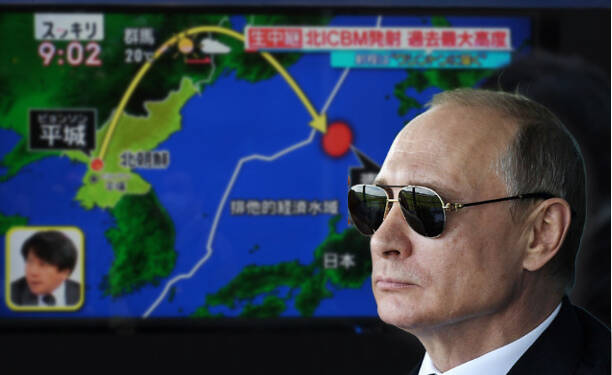 Japan’s nuclear push has received a warning shot across the bows. Tokyo has just been served a piece of cautionary advice by North Korea at the behest of Vladimir Putin.

North Korea is learned to have conducted its largest intercontinental ballistic missile (ICBM) test ever on Thursday.

This marks the end of a self-imposed moratorium on Pyongyang’s long-range testing.

Earlier, North Korea’s Supreme Leader Kim Jong-un also said that Pyongyang would soon launch multiple satellites. He said that North Korea would monitor military movements by the US and its allies, in an obvious reference to Japan and South Korea.

When North Korea conducts such a major test, it immediately instills panic in Japan and South Korea. However, this test was more closely associated with Japan. The Japanese Coast Guard revealed that the ICBM landed inside Japan’s exclusive economic zone, around 170 km west of Japan’s northern prefecture of Aomori.

The line of approach behind the test was to serve a warning to Tokyo. And it seems that the warning shot had its way straight out from Moscow.

On the surface, North Korea’s missile launch seems to be a case of saber-rattling by Kim. However, if there is anyone who seems to benefit from the latest missile launch by Pyongyang, it is Russian President Vladimir Putin.

Before the Ukraine invasion, Tokyo and Moscow were sort of amiable with friendly overtures. It seemed only a matter of time before the two countries would sign a peace treaty.

Putin’s angry reaction was followed by some angry remarks by Japan. It seemed as if Kishida was doing Biden’s bidding by going after Putin.

However, the latest missile test by North Korea takes attention off Russia. Given Japan’s experience with a nuclear attack, the country always prioritizes such developments in North Korea in its security policy.

As such, Fumio Kishida will be more worried about a missile test at Japan’s doorstep than the Russian invasion in Ukraine. He might as well tell Biden that if the US wants to prove its loyalty to Japan, it must start focusing on North Korea. And Biden, who has his kitty full with diplomatic embarrassments, will comply.

At the end of the day, it is Putin who will stand to benefit if Tokyo and Washington take some of its focus off Ukraine to decipher what Pyongyang is running at.

Given the influence that Russia enjoys over North Korea, the latest ICBM test has Russia written all over it.

Kishida, therefore, made a big mistake. He unnecessarily got involved in a dispute that wasn’t in any way connected to Japan. At the end of the day, he riled up Moscow over nothing and the next thing we know, Japan got served with a nuclear warning.