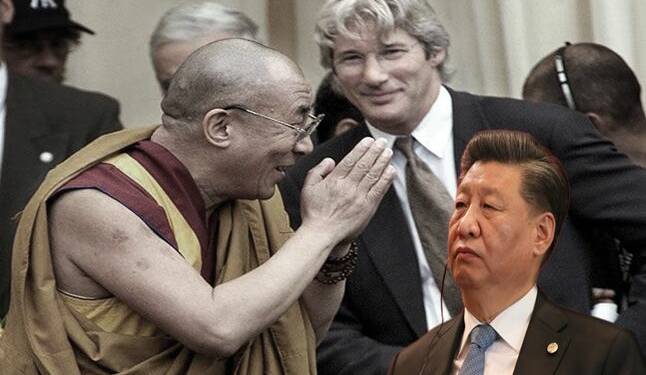 Do you know Richard Gere? Yes, I am talking about the handsome, good-looking businessman who had Julia Roberts go head over heels for him in the 1990 blockbuster Pretty Woman.

However, Pretty Woman was just one of Richard’s many brilliant performances. He starred in many other iconic movies like An Officer and a Gentleman, Runaway Bride, and Internal Affairs. At a commercial level, Richard Gere was a huge success, and he also had some good looks and impressive acting skills to complement his success. Then, why did Gere suddenly disappear from the limelight? Well, it has something or perhaps everything to do with China.

Richard Gere- a friend of Tibet

Like all other liberal stars in Hollywood, Richard Gere too has been an activist. His activism however centered around China.

Richard Gere is a Buddhist by religion and a long-time friend of the exiled Tibetan leader Dalai Lama. He is a co-founder of the Tibet House and a chair of the International Campaign for Tibet. Gere has since long demanded independence for Tibet and he has never been apologetic about it.

In fact, Gere always made it a point to speak up against the human rights violations being committed by the Chinese Communist Party (CCP) and Tibet’s right to self-determination. Gere had even appeared on The Simpsons, where he talked about the dream of a Free Tibet.

When Gere brought up the Tibet issue at the Academy Awards

Gere has actually been quite honest in his activism for a ‘Free Tibet’. And he even had to pay for it. So, in 1993, Gere found himself banned as an Academy Awards presenter. It was only natural because Gere actually denounced China while presenting the Best Art Director Academy award. He had publicly slammed China’s “horrendous, horrendous human rights situation”.

Not only was he banned, but perhaps he was also canceled. Ten years later, Gere’s musical film Chicago won six Oscars, including Best Picture. Gere’s co-stars Catherine Zeta-Jones, Queen Latifah, Renee Zellweger and John C. Reilly got nominated. But the iconic actor was left out. He was probably being punished for publicly condemning China’s brutal human rights violations.

Why was Gere canceled?

Till the time, Gere was criticizing China on smaller platforms, it probably didn’t matter to the CCP. However, everything changed once Gere slammed China at the Oscars. That was the last straw.

He condemned China’s tyranny at a time when China was becoming more and more influential with stunning economic growth. Throughout the 1990s and 2000s, China started asserting control and influence over Hollywood. People were then making a conscious attempt to placate China. In 1998, Walt Disney Co.’s chief executive officer Michael Eisner apologized for making Kundun that was based on Dalai Lama’s life. Jean Jacques Annaud, director of Seven Years in Tibet, too had declared that he “had never supported Tibetan independence, and… becoming friends with (the Dalai Lama) is out of the question”.

Chinese villains started disappearing from Hollywood movies. And in 2019, DC Comics pulled a Batman comic ad because Chinese supporters claimed that it carried a veiled reference to the pro-democracy protests in Hong Kong. Hollywood simply wasn’t ready to give up on Chinese investments in producing movies and a growing Chinese audience.

At such a time, Grene rubbed the CCP the wrong way. In 2017, the iconic actor himself said, “There are definitely movies that I can’t be in because the Chinese will say, “Not with him.” He also claimed, “I recently had an episode where someone said they could not finance a film with me because it would upset the Chinese.”

He also recalled an incident where he was banished from an independently financed, non-studio film that wasn’t even going to be released in China. The actor recalled, “There was something I was going to do with a Chinese director, and two weeks before we were going to shoot, he called saying, “Sorry, I can’t do it.” Gere added, “We had a secret phone call on a protected line. If I had worked with this director, he, his family would never have been allowed to leave the country ever again, and he would never work.”

Today, one can have a go at China and get away with it. In fact, China has become a pariah of sorts. In fact, Disney was criticized for filming Mulan in Xinjiang. Ted Cruz even brought the Stopping Censorship, Restoring Integrity and Protecting Talkies Act in 2020 which took an aim at the practice to alter film production to suit China’s censors.

Read more: ‘Won’t let you do propaganda,’ Hollywood sucks up to China to access its market. Ted Cruz is here to change that

However, when Gere condemned China, criticizing China wasn’t considered cool. And the iconic actor actually got cancelled for speaking about the human rights of the Tibetans. He got no big roles and was actually ostracized for rubbing the CCP the wrong way.