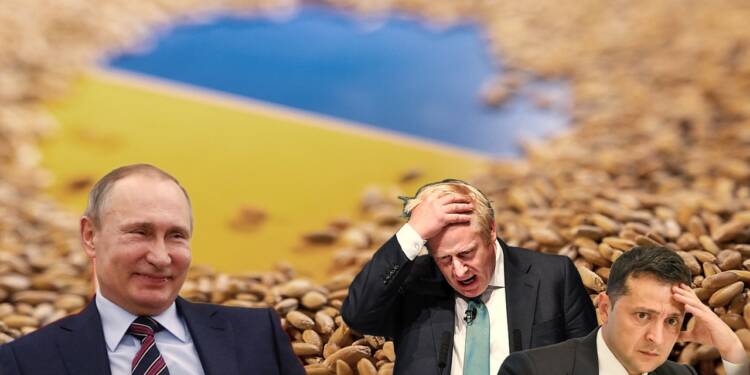 Bad news keeps coming out of the Ukraine crisis for Europe and the Western world. No matter what you read in the Western media, the Zelenskyy government is close to crumbling down. It doesn’t have enough military might to match the Russians and is already facing a deep stress on its financial resources.

Yes, the UK and other European allies were trying to help Ukraine. They had even chalked out a plan to ship Ukraine’s grains to other parts of the world and bring some much-needed relief for the Ukrainian economy. However, before they could effectuate this plan, Russia took away Ukrainian grain, effectively quashing UK’s plan to bail out Kyiv.

Russia has been choking food grain exports Ukraine. Presently, the Russian Navy has managed to close off the Sea of Azov and assume control of the Black Sea. This has resulted in a blockade sealing off Ukrainian shipping traffic and establishing a platform for the Russian Navy to launch assaults against Ukraine.

Ukraine is one of the world’s biggest food grain producers. Europe and other parts of the world import large quantities of food grains from Ukraine. However, the Russian Navy’s blockade has halted Ukrainian grain exports and has further pushed up global food prices. Today, around 20 million tonnes of grain are stuck inside Ukraine.

Read more: Europe must not cross the Rubicon if it wishes to avert WW3

This has led to “sea blindness”- the inability to gauge the role played by the naval power in a country’s security and economy. Europe needs to act fast given that the EU imports 36% of cereals supplies and 16% of oilseeds supplies.

Britain was looking at a plan to ensure a safe passage for Ukrainian grain exports. It had even given an in-principle approval for a proposal by Lithuania to create a non-NATO naval coalition “of the willing” to nullify Russia’s blockade. Lithuanian foreign minister, Gabrielius Landsbergis, was quoted by The Guardian as saying, “Time is very very short. We are closing in on a new harvest and there is no other practical way of exporting the grain except through the Black Sea port of Odessa.”

Landsbergis added, “There is no way of storing this grain and no other adequate alternative route. It is imperative that we show vulnerable countries we are prepared to take the steps that are needed to feed the world.”

Lithuania’s top diplomat had further clarified, “From my perspective the British government is interested in assisting Ukraine in any way it can. The UK has taken some very strong and decisive steps in this crisis and maybe there is a chance that the UK will participate. Britain was the first country to provide rockets to shield Odessa”.

Russia has however managed to neutralise UK’s plan of ensuring a safe passage for Ukrainian grain exports. Russia has, in fact, managed to ship thousands of tonnes of grains from the occupied Kherson region in Ukraine to Crimea.

Lahuta also indicated that farmers themselves may be willing to offload their excess grains by exporting them to Russia. He said, “Through links, many farmers sell these products for cash to the territory of the temporarily occupied Crimea.”

Therefore, Russia is taking excess grains out of Ukraine. And this comes as a huge setback for the EU, the UK and the Western world that wanted to somehow regain access to food grains of Ukraine. Putin has effectively quashed UK’s plans.

Finland says joining NATO a strategic success. But there is a problem