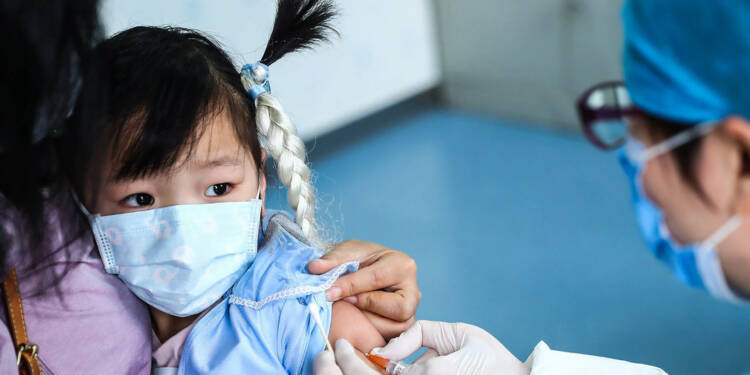 According to the Chinese vaccine manufacturer, Chinese health authorities have allowed the use of coronavirus vaccine for youngsters as young as three years old in an emergency situation.
“Sinovac has carried out a clinical study on the minor population, which started at the beginning of this year, with the first and second phase clinical trials completed,” Yin Weidong, the chief executive officer of Beijing-based vaccine company Sinovac Biotech, said state broadcaster CCTV on Friday. “Hundreds of cases showed that after vaccination, the group [three to 17 years old] is as safe as the 18-year-old adult group.”

Although other countries have permitted the use of vaccines for minors, none have gone so far as to extend it to such young children. After certifying another Chinese vaccine, made by Sinopharm, last month, the World Health Organization accorded Sinovac’s medicine an emergency use label for use on adults on Tuesday.

There is limited research on the vaccines’ efficacy or potential side effects in youngsters, and they are considered a low priority when compared to high-risk groups like the elderly or frontline medical personnel. When infected with Covid-19, younger persons are considered to have lesser symptoms.

It is unclear when Chinese children will begin receiving vaccinations, but the country is presently attempting to reach a goal of vaccinating 560 million people by the end of the month, with an emphasis on high-risk populations.

“The National Health Commission will organise relevant experts to promote the use of vaccines in lower age groups in an orderly manner based on the needs of the current epidemic in China and the composition of the population,” Yin said.

But the biggest problem with vaccinating children in China is not the policy to do so but the faulty Chinese vaccines. In April this year, the efficacy of Chinese coronavirus vaccinations is limited, according to China’s top disease control official, and the government is considering mixing them to improve their effectiveness. It’s yet another enormous humiliation for China, whose vaccinations have been widely panned owing to their low-efficiency rates and significant adverse effects, 73 in total.

Gao Fu, the Director of Chinese Disease Control, has spoken out against the vaccine quality and efficacy in China. States have rejected China’s vaccine due to quality concerns, putting the country’s ambitions to become a major vaccine supplier in jeopardy. the director of China’s Center for Disease Control has confirmed what was already widely known. Chinese vaccines are ineffective and dangerous, and Beijing has just approved them to be used on youngsters

As earlier reported by TFIGlobal, a Shanghai-based vaccine expert Tao Lina highlighted the frightening risks connected with China’s Sinopharm vaccine earlier in January. For the past 20 years, Tao has worked at the Shanghai Center for Disease Control and Prevention (SCDC). He dubbed the Chinese vaccine the “world’s most dangerous vaccination” after it was discovered to have as many as 73 negative effects.

China-made vaccines are also exceedingly harmful. They are also inappropriate for administration due to inadequate quality standards, in addition to the undesirable responses. To allow them to be administered to youngsters, China has endangered their lives.

Read More: China’s three-child policy explained: If you try to control evolution, evolution will end up controlling you

Moreover, China is also feeling the pressure of a major population decline, which has already started. For nearly four decades, each Chinese family raised only one child, resulting in a significant reduction in the number of young workers available in various businesses across the country. Despite the fact that the CCP continues to face a severe shortage of new individuals joining the workforce, China has been suffering severely as a result of the One-Child Policy, which has resulted in a large number of elderly residents leaving their occupations.

China’s demographics would take another 10-15 years to return to normal after the One-Child Policy was repealed in 2016. However, based on the policy shift in just four years, it appears that the calculations for the demography to return to some semblance of normalcy would take longer than previously anticipated.

Thus, to administer faulty vaccines to a youngster could not just become a demographic disaster for China, but it could land it in another health crisis, one which is again its own making and it will even graver ramifications and troubling consequences.