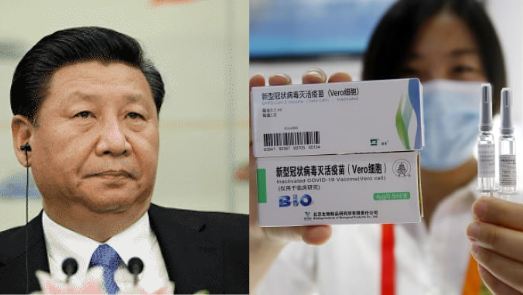 China’s top disease control official says the efficacy of Chinese coronavirus vaccines is limited, and the government is considering combining them to increase their effectiveness. It is another major embarrassment for China, whose vaccines have been criticised the world over due to their low efficacy rates and major side effects, 72 to be exact.

Gao Fu has come out to criticise the lax quality and efficacy of Chinese vaccines. China’s bid to become a major vaccine exporter was dented as states rejected its vaccine over quality issues. Now the director of the Center for Disease Control in China has stated what was already a well-known fact. Chinese vaccines are inefficient and unsafe and now Beijing has nowhere to go.

Gao Fu said at a conference on Saturday in Chengdu, southwestern China, that Chinese vaccines “don’t have very good safety rates.” He said, “It’s now under formal consideration whether we should use different vaccines from different technical lines for the immunisation process.”

Gao did not go into depth about potential strategy shifts, but he did discuss mRNA, a previously experimental technique used by Western vaccine developers while China’s drug makers relied on conventional methods. “Everyone should consider the benefits mRNA vaccines can bring for humanity,” Gao said. “We must follow it carefully and not ignore it just because we already have several types of vaccines already.”

Gao has expressed concerns about the safety of mRNA vaccines in the past. According to the official Xinhua News Agency, he said in December that since the drugs were being tested on healthy people for the first time, he couldn’t rule out negative side effects. The safety and efficacy of the Pfizer vaccine, which uses mRNA, have also been challenged by Chinese state media and prominent health and science blogs.

Read More: CCP top brass does not want to get the Chinese vaccine and their list of excuses is simply hilarious

Earlier in January, as reported by TFIGlobal, a Shanghai-based vaccine expert Tao Lina has exposed the shocking risks associated with China’s Sinopharm vaccine. Tao has been working at the Shanghai Center for Disease Control and Prevention (SCDC) for the past 20 years. He described the Chinese vaccine as the “most unsafe vaccine in the world,” after it was found to be having as many as 73 side effects.

Moreover, in late November last year, a survey was conducted in a local hospital in Shanghai. The survey found that only 10 per cent of workers in a local hospital in Shanghai expressed their willingness to get immunised with a Chinese vaccine for COVID-19. The remaining 90 per cent outrightly refused any Chinese vaccination over a basic lack of trust in the authoritarian country’s brazenly inefficient and often lethal vaccine industry. As reported by China in Focus – NTD, the survey also found that only three workers from a real estate company in the city said that they would get immunised with a Chinese vaccine.

Researchers in Brazil discovered that the coronavirus vaccine developed by Sinovac is only 50.4 per cent effective at preventing symptomatic infections. Pfizer’s vaccine, on the other hand, has been found to be 97 per cent effective. The efficacy in Indonesian trials was found to be 65.3 per cent. Even the WHO has refused to provide these vaccines authorisation for their COVAX program as only 5 Chinese vaccines were eligible for export compared to 47 vaccines from India.

Vaccines from China are also extremely dangerous. Apart from the negative responses, they are also unfit for administration due to lax quality controls. China’s vaccines are barely approved for export by the WHO, revealing the Communist country’s lax quality control. Apart from COVID-19, the Chinese vaccine industry is known for developing dangerous and ineffective doses that have resulted in several disasters in the Communist country.