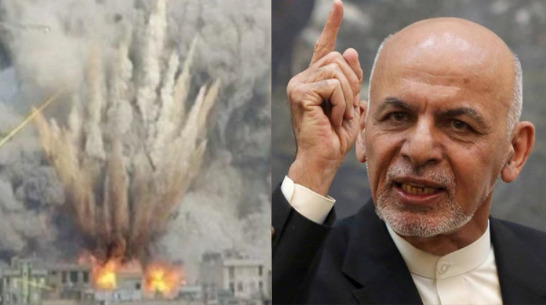 The Taliban had the opportunity to form a unity government with the present civilian regime in Kabul. It would have offered Taliban a road to power which would be bloodless and in which innocent lives would not have been lost. Furthermore, such a government could maneuver its way through in relations with all major countries. However, the Taliban has blown up this opportunity, and now, the Afghan government and armed forces will hunt down Talibani terrorists for as long as they can. The Taliban fired at least three rockets at the Kandahar airport in southern Afghanistan on Saturday night.

Flights out of Kandahar, Afghanistan’s second-largest city and was also the former bastion of the insurgents, were halted after rockets struck the airport before dawn. Airport chief Massoud Pashtun said two rockets had hit the runway and repairs were underway with planes likely to resume service later on Sunday. The Taliban targeted Kandahar airport as it is crucial to maintaining logistical and air support needed to keep the Taliban from overrunning the city, while also providing aerial cover for large tracts of southern Afghanistan.

Therefore, it seems the Taliban is laying the ground for capturing Kandahar. This by no means will be taken lying down by the civilian government of Afghanistan. Therefore, in a jaw breaking response to the rocket attacks at Kandahar airport, the Afghan armed forces eliminated 254 terrorists of Taliban in airstrikes at 13 different regions. Reports claim that 97 terrorists have been injured in the attack.

Taliban’s hideouts was targeted by #AAF in Zherai district of #Kandahar province yesterday. Tens of #terrorists were killed and wounded as result of the #airstrike. pic.twitter.com/mY0QFj2Njo

The popular imagery in the minds of the people is that the Afghan security forces are weak, feeble and unable to take on the Taliban. Indeed, the Taliban does have an upper hand over the civilian government of Kabul. But that in no way means that the security forces of Afghanistan – trained by the United States and backed by Russia and India are going to back down from a fight.

Read more: Taliban is not as strong as the media wants you to believe and they are dying for a settlement

According to the Hindustan Times, the Afghan security forces have also recently killed Pakistani military officials, which points to the fact that Pakistan is actively supporting the Taliban in their endeavours. According to Afghan Army 209 Corps, a Pakistan army officer named Javed was killed by intelligence agency officers. They said that Javed was leading the Taliban in Logar, Paktia, and Paktika provinces.

The Taliban is not going to have a smooth ride to Kabul. It will face heavy casualties, and a lot can change between now and the next six to twelve months in which the extremist organisation is expected to reach Kabul. While Taliban has the backing of Pakistan and China, the civilian government has the support of India and Russia. Therefore, the Taliban is not going to have it easy by any estimates, and the massive losses suffered by it in the latest airstrikes show how the security forces are pumped up to obliterate the terror organisation.