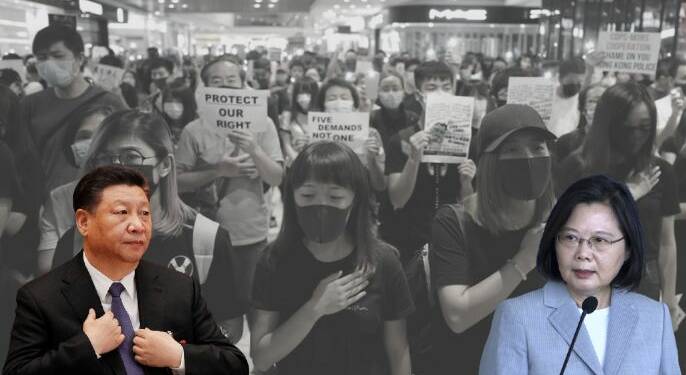 Hong Kong has come under the complete control of the Chinese Communist Party. Last year, a draconian National Security Law was enforced in the erstwhile free city. The law prohibits subversion, terrorism, secession and “collusion” with foreign forces. Of course, these are all terms behind which the CCP hides to mask its brutal crackdown on dissent and free speech. Since last year, the people of Hong Kong have been desperately wanting to get out of the city, in search of freer pastures around the world. They have found safe havens in the United States, the UK, among other countries. Taiwan, on its part, has been at the forefront of helping Hong Kongers escape the CCP’s clutches.

Now, Taiwan wants to up its game. So, the Tsai Ing-wen government is opening its doors for the people of Hong Kong and Macau. Taipei plans to make it easier for people from Hong Kong to stay in Taiwan. According to Bloomberg, officials plan to allow people from Hong Kong and Macau who are studying and working in Taiwan to extend their residence permits for up to one year while job seeking. The new rules, which also make it easier for students to gain permanent residency after completing advanced degrees in Taiwan, could take effect as soon as early next year.

Between January and August this year, data from the National Immigration Agency of Taiwan shows that 6,150 Hong Kong residents relocated to Taiwan. Meanwhile, close to 10,800 Hong Kongers gained residency in the democratically-ruled island throughout last year, a bulk of which would have obviously come after the imposition of the National Security Law by the CCP in July 2020.

Taiwan’s push for ensuring more Hong Kongers receive a safe haven within its territory comes after the Chinese Communist Party quietly broadened the language it uses to describe national security violations. According to Bloomberg, CCP authorities in Hong Kong have begun using the phrase “contrary to the interests of national security” in recent weeks to define new red lines in the entertainment industry and the tax code. This shift could have dire consequences for the sectors dealing with technology and media, where political issues often crop up. Trade unions, filmmakers, journalists, charities and professional associations – all stand the risk of running into troubles with the CCP now.

Taiwan is not only aiming to provide residency to the people of Hong Kong, but also those fleeing Macau. As reported by TFI recently, after the shameless implementation of the National Security Law and brutal crackdown on Hong Kongers, Xi Jinping’s paranoia has led him to Macau. On September 15, shares of Macau casino operators dropped by over a third of their value, or $18 billion, as the Jinping regime began a regulatory revamp that may see its authorities overseeing enterprises in the world’s largest gambling market.

The drop in value of Casinos came after Macau’s secretary for economy and finance, Lei Wai Nong, announced on September 14 that a 45-day consultation period on the gaming business would begin the next day, citing oversight issues. By clamping down on the casino businesses in Macau, on which the special administrative region (SAR) depends heavily in purely economic terms, Xi Jinping may very well try to target important people in the CCP and by browbeating them, he may try to consolidate his own position.

By extending help and relaxed residency norms for the people fleeing Macau fearing an imminent CCP crackdown on the city, Taiwan has sent a stern message to China and set an example for the free world to follow.

China Won’t Be Happy with Taiwan

Needless to say, the Chinese Communist Party will not appreciate Taiwan’s humane gestures for the people of Hong Kong and Macau. Already, China has been bruised by news of India finally embracing Taiwan and working on a multi-billion-dollar deal with it for semiconductor manufacturing. Giving a jolt to One China policy, the Narendra Modi government is in advanced talks with Taiwan over bringing a chip plant worth an estimated $7.5 billion to India to supply everything from 5G devices to electric cars.

Additionally, China could be facing an imminent defeat at the hands of Taiwan at the TPP-11, the membership of which both the countries are pursuing. However, the TPP-11, influenced by the likes of Japan and Australia, is much more inclined to allow Taiwan membership of the trade bloc, and this would be a diplomatic coup for Taipei against Beijing.

Taiwan is really becoming an obstacle in the path of China from accomplishing complete domination over the people of Hong Kong and Macau. The best part really is that Taipei is in no mood to relent to the CCP.