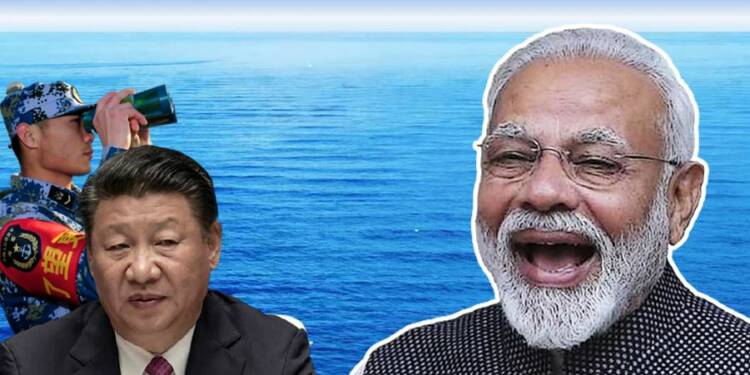 The only world power that can rival China’s burgeoning military and economic might in the 21st century, is India. China very well realizes this fact. So, decades ago, it started working on a strategy to encircle India by developing its naval strategic assets across the Indian Ocean, which was first identified by defence experts of the US in 2004, by the name of “String of Pearls” strategy.

The other reason for China to pursuit this super ambitious agenda, was its “Strait of Malacca” dilemma. India can effortlessly block China’s trade and oil supplies passing through the Indian Ocean, by engineering a naval blockade at the Strait of Malacca – a narrow stretch of water between Malaysia and Indonesia that links the Indian Ocean to the South China Sea.

So, in its quest to outpace India in the naval arena, China targeted crucial maritime chokepoints to develop its strategic bases, such as the Strait of Mandeb, the Strait of Malacca, the Strait of Hormuz, and the Lombok Strait, as well as other strategic maritime centres in Pakistan, Sri Lanka, Bangladesh, the Maldives, and Somalia. But much to China’s disappointment, China’s “string of pearls” strategy appears to have hit a dead-end within a mere two decades of its initiation.

Latest setback in the UAE:

The latest setback for China came from the UAE, where China was trying to build a secret naval base to set its foothold in the Persian Gulf region. The UAE, which appeared to be clueless about China’s nefarious designs in the port of Khalifa, was informed by the US about China’s secret plans, prompting the UAE to kick the Chinese out of their country.

Similarly, China’s ambitious naval projects in two of India’s immediate neighbours, that is Pakistan and Bangladesh, have also fallen into disarray. China was developing a deep-sea port at Sonadia island in the southeastern coast of Bangladesh. However, in October last year, Bangladesh called off the development citing environmental concerns.

Similarly, China’s ambitions of developing Pakistan’s Gwadar port into the regional commercial hub for facilitating China’s trade through the China-Pakistan Economic Corridor, have ended up in tatters, thanks to the burgeoning militancy in Pakistan-occupied regions of Balochistan. A frustrated China has now signalled its will to shift its shipping activities to Pakistan’s another port city of Karachi, to steer clear of Baloch freedom fighters, who see China as an invading force.

Also read: An India-West Asia-Europe trade corridor is all set to drive China’s BRI into the ground

Through its aggressive chequebook and debt-trap diplomacy, China had also acquired the port of Hambantota in Sri Lanka and Marao Atoll of Maldives, to encircle India in its backyard. As for Hambantota, the Sri Lankan government has already restricted China’s activities to commercial trading, after being pressed by the Indian government. In November 2014, Sri Lanka had allowed one Chinese submarine and one warship to dock at its port of Colombo, raising red flags in New Delhi and prompting the Modi government to issue a stern warning to Sri Lanka. Resultantly, Sri Lanka had to make it clear to its Chinese bosses, that ports in Sri Lanka should only be used for carrying out commercial activities.

As for the Maldives, the country has remained extremely generous towards India, and hawkish towards China, after the regime change in 2018. China-backed Abdulla Yameen, who helped China strengthen its grip over the island nation, is now rotting in jail, while the new government embraces India and supports a strong military and economic relations with New Delhi.

Similarly, China was also eyeing Mombasa port in Kenya to strengthen its presence in the Western flank of the Indian Ocean. It debt-trapped Kenya, and pressed the government to relinquish control over its Mombasa port, which is vital for Kenya’s economy and international trade. However, in March this year, Kenya stood up to China’s hegemonic attitude and made it abundantly clear that the Mombasa port faced no threat from any of its bilateral partners, as no public assets, especially those as significant as the said port, were offered to China as collateral in exchange for the extravagant SGR (standard gauge railway) loans from China’s Exim bank.

Also read: China wanted to gain the control of Mombasa port by debt trapping Kenya, but Kenya turned out to be too smart for them

No relief in Duqm and Djibouti either:

Though China has remained successful in developing strategic assets in Duqm port of Oman, and a fully-functioning naval base in Djibouti near the Strait of Mandeb, India and other democratic powers have also matched and even outpaced China’s naval strides in these regions. For instance, India also has its significant presence in the port of Duqm, while France, the USA, Japan and Italy, have also stationed their naval assets in Djibouti.

As for China’s ambitions of militarizing the South China Sea region, the emergence of Quad and involvement of major European powers including Russia, France and Germany in the hotly contested waters, have only complicated Beijing’s security environment.

Also read: Djibouti is going to be the biggest war theatre in the whole world in few years to come

The recent eruption of riots in the China-suppressed Solomon Islands, and the Australian government’s reservations regarding the China-held Darwin port in northern Australia, also insinuate China’s sinking fortunes in the pacific. As China locks its horns with major naval powers of the Indo-Pacific region, including Japan, India and Australia, its “string of pearls” strategy has gone up in smoke, along with China’s dreams of dominating India and the world.