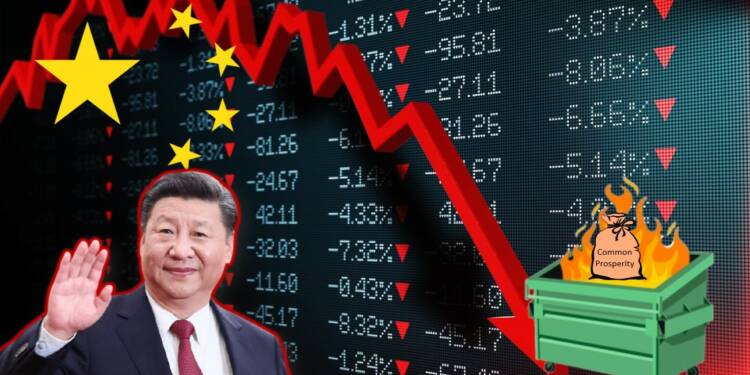 In a surprising move, Chinese Premier Li Keqiang has called for tax cuts in a bid to stabilise the economy. This is a major pivot from Xi Jinping’s “common prosperity” campaign that aimed at “curbing the disorderly expansion of capital”.

Li Keqiang had an important message for Chinese financial and tax officials during a meeting in Beijing on Wednesday. The Chinese Premier said, “Our country’s economy is facing new downward pressures.” Li added, “It is necessary … to further cut taxes and [administrative] fees to ensure a stable economic start in the first quarter and stabilize the macro economy.”

Last month, Xi had himself, along with other top CCP leaders, point out “stability” as their top priority for 2022.

Xi had made “common prosperity” the main objective of his economic policy. He was cracking down on businesses and trying hard to ramp up State intervention in the private sector.

Xi had a simple agenda- he wouldn’t let rich entrepreneurs live with peace. The Chinese President wanted to achieve Chairman Mao’s vision of equality, even if it meant making everyone equally poor in China. This led to Chinese tech billionaires losing billions of dollars and over 4 million small-scale firms disappearing from China last year.

And it was the CCP, which led to many Chinese businesses shutting their businesses. Chinese authorities were browbeating local businesses with bogus tax, unfair penalties, and extortion tactics. And China also couldn’t keep its infrastructure in good shape.

Strict power rationing last year led to many food processing units and producers of important metals halting production. Many businesses then prefer shutting shop instead of running in losses and this is how “common prosperity” becomes a huge problem for Chinese businesses.

Yet, Xi seems to have realised that his “common prosperity” campaign is hardly sustainable. Far from cracking down on the corporate sector, Li Keqiang said, “The government must tighten its belt” to help companies and underlined the importance of “overall stability” for the corporate sector.

In his speech, Li also asked for extending small tax cuts for small and micro firms and individual businesses. This policy had originally expired at the end of 2021. But given the millions of small firms that shut shop last year, the CCP seems to have extended the policy.

Why Xi has given up on “common prosperity”

Well, what Li Keqiang said pretty much explains the situation. The Chinese economy is in a downward spiral and the CCP simply cannot do anything to change that without support from the corporate sector.

A perfect storm is gathering for the Chinese economy with three main factors- contracting demand, supply shocks and weakening expectations. The real estate crisis in China has taken down construction activity that used to be the driving force of Chinese economic growth.

Moreover, recurrent COVID-19 outbreaks, power sector crisis and jamming of ports has created supply chain difficulties. It is simply becoming way too tough for Chinese businesses to operate in such circumstances.

Meanwhile, Chinese consumers are afraid of a terrible future and saving all the money that they have with them. This has further lowered consumer spending in China, and this is further harming Chinese businesses.

For the CCP, torpedoing the Chinese economy isn’t an option. It is the Chinese economy that has made the CCP powerful. CCP commits human rights abuses and gets away with it, only because many countries on the planet don’t want to antagonise the second-largest economy in the world.

Xi himself realises that his “common prosperity” campaign isn’t workable, and this is why he is giving up on it. But he only emerges as a weak, uncertain leader in the process.