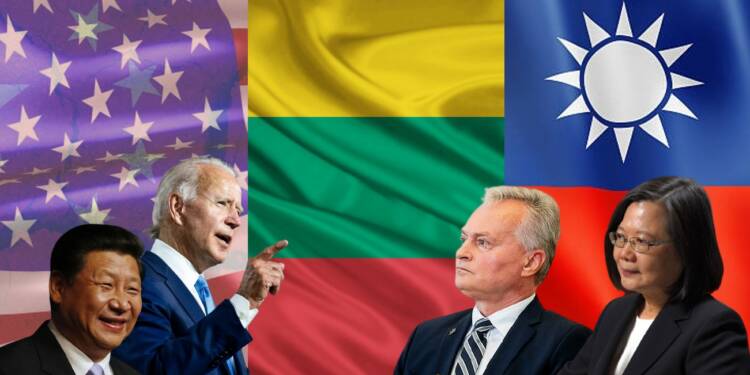 You must have heard of Lithuania, a small Baltic country with a small population of just 2.8 million. The country was in news recently for allowing Taiwan to open a representative office in the country and smashing Beijing’s One China policy. And then there was a predictable turn of events- the CCP reiterated the One China policy, bullied Lithuania and the EU came to Lithuania’s rescue.

So, Lithuania was standing up to Chinese coercion and the EU was publicly backing up the small Baltic country. So far so good. But then, Biden suddenly jumps in and comes up with a proposal for Lithuania- abandon Taiwan and bow down to China. And guess what, we are not sensationalising this. This is what Biden has actually done- bully Lithuania at China’s behest.

American diplomats reportedly recommended to Lithuanian officials that the name of the Taiwan representative office in Vilnius be changed in order to avoid China’s wrath.

And soon, Chinese President Xi Jinping went bonkers. He tried to coerce Lithuania into submission with threats of a trade war. But then France-led EU responded with threats of sanctions in case of China going after Lithuania.

So, the Biden administration has effectively gone as far as telling Lithuania that it should cater to Beijing’s ego and rename the “The Taiwanese Representative Office in Lithuania” in line with the One China policy.

Meanwhile, a spokesperson for the National Security Council denied that the Biden administration had suggested a change in the name of the representative office. The spokesperson said, “Anyone who suggests otherwise is not reflecting actual discussions between the US and Lithuania.”

The American official added, “We respect and support Lithuania and Taiwan’s efforts to enhance their ties and practical co-operation.”

Lithuania may be succumbing to American pressure already

The Biden administration can stay in denial mode, but the fact remains that the US itself continues to cater to the One China policy.

Last year, Taiwan had requested Washington, D.C. to make a change in the name of its de facto US embassy. But the Biden administration hasn’t responded to that request till now and the Taiwanese representative office in the US continues to be called the “Taipei Economic and Cultural Representative Office in the United States.”

In fact, Lithuanian leadership may be already crumbling under Biden’s pressure.

On January 4, Lithuanian President Gitanas Nauseda said that it was a “mistake” to allow Taiwan to use the word “Taiwanese” for the representative office’s name. He had also suggested that he hadn’t been consulted ahead of time. Aušra Maldeikienė, a Member of the European Parliament and noted Lithuanian economist, had then slammed “our pathetic President” for calling on Lithuania to “bow down to the Chinese Communist Party after they called us dogs.”

You can’t really blame Nauseda though. When you are the President of a small country and have two of the world’s biggest bullies- Chinese President Xi Jinping and US President Joe Biden cornering you, there is not much left to choose. Biden has thus backstabbed the free world. The EU and French President Emmanuel Macron were showing China its place, but the Biden administration jumped in out of thin air and coerced Lithuania into toeing Beijing’s line.