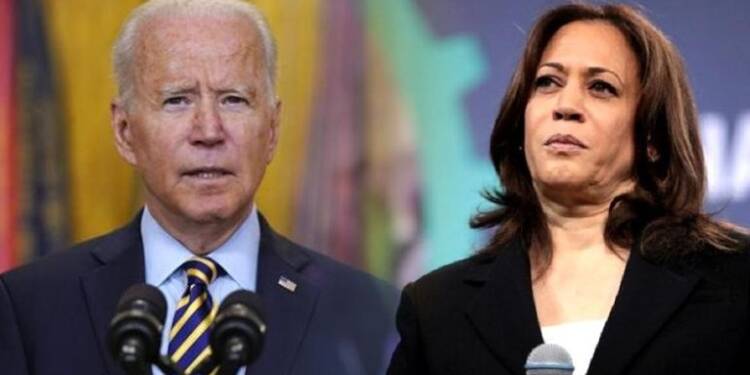 Awkward things will continue to happen as long as Joe Biden is the US President. After all, the man is an expert in embarrassing himself and in making speeches that no one can really understand. But wait, he could be up to something far more embarrassing.

Ever since the news about Supreme Court Justice Stephen Breyer’s retirement, speculation has been rife that Biden could replace him with Vice President Kamala Harris. This would help him keep his promise of appointing a black woman to the prestigious post and also get rid of a politically tainted lieutenant ahead of the 2024 Presidential polls. And while many may have dismissed this as mere speculation, we are coming quite close to the comical scenario.

McEnany said, “I think it’s a theory that could be credible.” He made the observation while co-hosting the “Outnumbered” show on Fox News. The idea was originally put forward by McEnany’s colleague Harris Faulkner. In June, he had claimed that Biden had repeatedly stated that he would pick a black woman as his first Supreme Court nominee and Faulkner said that “it’s hard to not to see, at least, [Harris] makes the list.”

Kamala Harris’ forgettable year in office as US Vice President

Kamala Harris however made a mess of her job as Biden’s deputy. Let’s go through 2021 and we will realise what a miserable year it was for Kamala. She had some embarrassing moments like laughing in response to her incompetence as the border czar, failing to win favour with Central American leaders and possibly facing ‘Havana Syndrome’ during her Southeast Asia visit.

Why Biden wants to get rid of his Vice President?

Let’s accept it- Biden is old but as a seasoned politician, he has no intentions of retiring after the 2024 polls. He wants a second term in power. In fact, he doesn’t want to retain a Vice President who wants to replace him three years down the line.

Also, Vice President Kamala Harris’ track record is too much of a problem for Joe Biden. Even apart from her administrative incompetence, Kamala is also not very popular with the far-left Democrats or the so-called progressives.

Remember, Kamala has a law enforcement background and represented the “tough on crime” era amongst the Democrats in the 1990s and 2000s. Her criminal justice record does not go down well with the progressives who do not want to punish criminals and prefer anarchy to law and order.

So, Biden wants a running mate who wouldn’t come out looking incompetent and unfit for the far-left Democrats who control the incumbent administration. This is why he also kept giving her difficult tasks like handling an unprecedented migration crisis on the American border, selling the “American Rescue Plan,” advocating Biden’s infrastructure package, representing women in the workforce, highlighting the Black maternal mortality rate, assisting small businesses, assessing water policy, promoting racial equity, combating vaccine hesitancy, and fighting for a policing overhaul.

And guess what Kamala failed at every single task given to her by Biden. So, Biden has every excuse to get rid of Kamala and appointing her as a Supreme Court Justice instead.