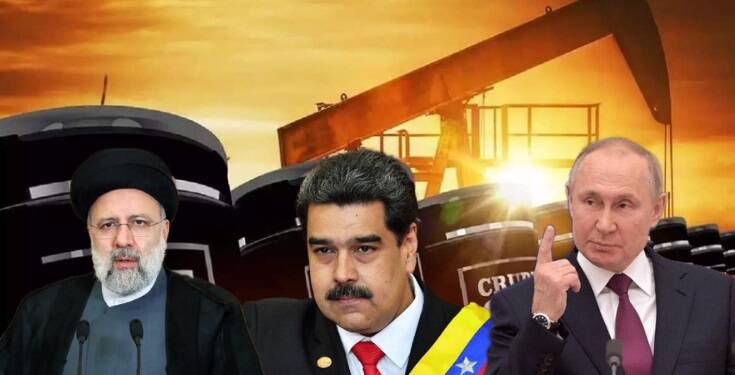 Sanctions against Russia are doing more harm to the West than to Russia itself. And with oil and gas suppliers across the world strongly backing Russia, it is almost as if the West is sanctioning itself. So, let’s see how Russia, Iran, Venezuela and the Arabs have put the Western world in a tight spot.

When Russia launched the Ukraine invasion, every Western official could speak about just one thing- sanctions. They wanted to strangulate the Russian economy with the tightest possible sanctions. But who loses out if the West sanctions Russia left, right and centre? Well, it turns out that the Western powers are themselves the biggest losers because oil and gas prices are going through the roof and literally no one wants to bail out the West.

In fact, Russia is now weaponizing its oil and gas supplies. Russian Deputy Prime Minister Alexander Novak said, “In connection with unfounded accusations against Russia regarding the energy crisis in Europe and the imposition of a ban on Nord Stream 2, we have every right to take a matching decision and impose an embargo on gas pumping through the Nord Stream 1 gas pipeline.” Novak added, “But so far we are not taking such a decision.”

So, basically, Russia is telling the West that it reserves the right of introducing counter-measures against its sanctions. And this puts countries like Germany in a fix, which gets one-third of its gas supplies from Russia.

And if Russia, the second-largest oil producer in the world, starts weaponizing crude oil exports too, then the US too could face problems. The US imports a lot of Russian crude oil. Last year, it imported an average of 209,000 barrels per day (bpd) of crude oil and 500,000 bpd of other petroleum products from Russia.

With natural gas and crude oil prices hitting record highs, the West is staring at a big problem here.

Meanwhile, the West’s attempts to turn to Iran amidst the ongoing oil and gas crisis too are falling flat on their face. The US is trying to revive the Iran nuclear deal so that crude oil purchases can be diverted and Russian oil replaced with Iranian oil.

However, Iran and Russia are not letting the Iran nuclear deal, or what is officially called the Joint Comprehensive Plan of Action (JCPOA) get through. Iran sought details of Moscow’s demands for US guarantees on reviving the nuclear deal. Russia on its part said that it wants written assurances from the US that Western sanctions imposed by it won’t affect Russian military and economic cooperation with Tehran.

Such demands are, of course, unacceptable for Western powers. US Secretary of State Antony Blinken called them “irrelevant” and said that sanctions over the Ukraine crisis “have nothing to do with the Iran nuclear deal”. Yet, it is clear that Iran is in no hurry to sign the nuclear deal. It is weaponizing the nuclear deal in association with Russia and is using it as a bargaining chip against the West. So, the West can as well forget to rely on Iranian oil.

Little progress on the Venezuela front

Imagine US officials are so desperate that they even visited Venezuela and discussed the possibility of easing oil sanctions on the Latin American country. They tried to induce Venezuelan officials into helping the US replace Russian oil with Venezuelan oil, and getting rid of tough US sanctions.

However, not much progress was made during the high-level bilateral talks. Venezuela is one of Russia’s closest Russian allies and the US attempt to drive a wedge between them doesn’t seem to be going anywhere.

The US would have expected that at least Arabs will come to its rescue, by increasing oil production and easing escalating crude oil prices. However, the Gulf States have resisted all such demands. An analyst explained, Hasan Alhasan, a Middle East analyst, said, “Gulf countries have said: ‘This isn’t our war.’ A very similar message, by the way, to the one consistently sent by the US to the Gulf states on Yemen… over the past several years.”

So, this one last hope of the Western world to find some relief amidst surging crude oil prices too has gone down the drain. For Russia, this comes as a major boost. It knows that Europe and the US will have to keep buying oil and gas from it at enhanced prices. With all other oil producers backing Russia, it is almost as if Russia and all other big oil producers are imposing counter-measures against Western powers.