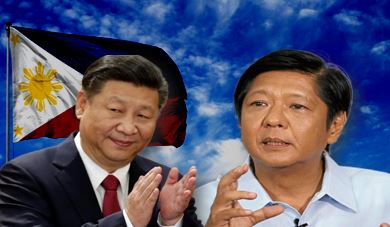 The Philippines is about to elect a new President. Rodrigo Duterte will therefore get replaced by a new leader on May 9 when the Southeast Asian nation goes to the polls.

And going by the current trends, Ferdinand “Bongbong” Marcos Jr., son of the former dictator Ferdinand Marcos, is well on track to getting elected as the country’s next President. But it could be a huge mistake for two reasons-

Let’s address the bigger issue First—Bongbong is bound to go soft on China.

In fact, Sara Duterte, the daughter of incumbent President Rodrigo Duterte is Bongbong’s running mate. And we all know how Rodrigo Duterte has been doing China’s bidding in the Philippines.

Bongbong to pursue a strong relationship with China

And then, Bongbong has himself said that he will pursue a strong relationship with China, while not abandoning the West. Therefore, it’s pretty obvious where the tides will turn if Bongbong assumes power.

Now, the Philippines has made some progress in countering Chinese belligerence.  Yes, Duterte does follow a soft policy on the Beijing front but the Philippine defense establishment remains hawkish on China. It has cooperated with powers like India and Japan to undermine the Chinese and it has also succeeded to some extent.

Bongbong in power as the President could however change everything. China already expects that once Bongbong comes to power, he will sideline the 2016 arbitration award that rejected Chinese claims in the South China Sea. And Beijing also expects that Bongbong will back China’s line on international issues.

In return, China will help the Marcos family strengthen its stronghold in Philippine politics. Make no mistake, Bongbong is a controversial figure in the Philippines. He has a lot of support in the country but he also faces some fierce opposition due to the entire history of his father’s brutal regime. So, Bongbong will need money and muscle to curb dissent and consolidate his political power.

Beijing will give him this money and muscle. The Marcoses are likely to use Chinese money and commercial opportunities for rewarding local elites and rolling out development projects in their home province Ilocos Norte.

And the Marcoses, who maintain long-time rule over Ilocos Norte, already maintain close working ties with the Chinese. They have been habitually bypassing Manila and directly taking donations from Beijing. China has made big investments in different areas in Ilocos Norte including solar and wind energy, Universities, agriculture, and other projects.

So, Bongbong will let China exercise more influence in the Philippines and in return, will be able to redirect Chinese investments in his home province.

Read more: Duterte is putting his weight behind Bongbong. And that’s a nightmare for the Philippines

Bongbong continues to face a lot of resistance from some critics in the Philippines who feel that he will reintroduce the brutal policies of his father’s regime. Ferdinand Marcos was an autocrat, who had shut down Congress and other democratic institutions in the Philippines before unleashing a spate of human rights violations.

Those who criticized Marcos had to face state-sponsored rapes and murders. As per data under the Philippines’ Human Rights Reparation and Recognition Act of 2013, for claiming compensation on account of Marcos-era brutalities, 11,103 individuals had fallen victim to Marcos’ dictatorship.

However, Amnesty International (AI) said that there were 107,200 victims, who were killed, tortured, and jailed by Marcos.

There are many in the Philippines, who feel that Bongbong may bring back his father’s autocratic policies. Loretta Rosales, a former history professor, who was tortured and gang-raped by Marcos’ troops under martial law in the 1970s, feels scared about the prospect of Bongbong coming to power. She said, “I don’t want this to happen again to my people.”

So, given the kind of language that Bongbong’s supporters are using, it is certain that he will avenge his enemies after coming to power. In order to sustain his corrupt and authoritarian government, he is seemingly looking at Chinese support. Electing Bongbong as the next President could thus turn out to be a massive mistake for the Philippines.

‘China can survive this economic Armageddon only if it abolishes Xi’s policies,’ Chinese premier declares