Is Spain denying all sort of assistance to Cuba at EU’s behest?

Spain, which is one of the most crucial allies of Biden and Leyen, believes that Havana is draconian for using riot control equipments 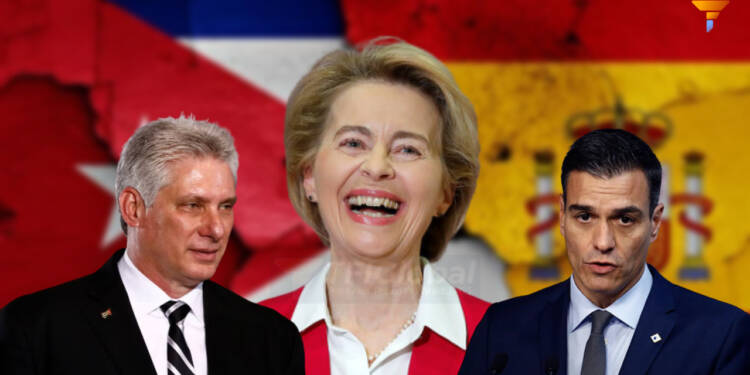 Spain’s government has refused the delivery of tear gas cartridges and other riot control devices to the government of Cuba. According to a report published by the Interministerial Regulatory Board for Foreign Trade in Defense Material and Dual Use (JIMDDU), a government agency of Spain which looks after the export of arms, the reason for denying Cuba’s request is its regime’s “lack of respect for human rights”.

The JIMDDU also cited a regulation of the European Union for justifying its decision, it also emphasised that Havana has no regard for international humanitarian law.

Cuba is not the only country which has been denied the export of defence material by Spain as earlier it refused to export 50,000 tear gas cartridges ordered by the government of Central African Republic. It followed suit with Burkina Faso.

Now, why did Spain refuse the delivery of defence equipment and riot material to Cuba, Burkina Faso and the Central African Republic?And, why did it allow the delivery of the same to Peru, which is witnessing similar political turmoil?

The reason is that Cuba is one of the chief rivals of the US, which has always unlawfully interfered in its internal matters, and the European Union is the key partner of the US.

Recently, one of the allies of Washington, Grenada, condemned the imposition of economic sanctions on Cuba and called on Biden to lift them. Similarly, Russia’s ally and Africa’s biggest gas exporter, Algeria, publicly announced its support to Cuba and stressed that it will resolve Havana’s energy crisis.

While the leader of St. Vincent and the Grenadines, Dr Ralph Gonsalves, criticised the US for circulating propaganda against Cuba and emphasised the generosity exhibited by the regime of Miguel Diaz-Canel for his nation.

As aforementioned, Spain did the same with the Central African Republic (CAR). Since its president, Faustin-Archange Touadera, has strong relations with Russia, in fact he invited the Russian military to train his forces and also receives protection from the Wager Group.

Similarly, Burkina Faso, which too was refused service by the government of Spain, is close to Moscow. As a matter of fact, the founder of Wagner Group, Yevgeny Prigozhin, who has good ties with the Kremlin, praised the president of the West African country, Ibrahim Traore.

These instances prove that Spain’s refusal to Cuba, Burkina Faso and CAR is not because it is concerned about their democracy, rule of law and human rights. It is because these countries are perceived as “enemies” by its principal ally, the US, for partnering with Vladimir Putin.

Read more: Clear signs are here that the US is afraid of Cuba- Haiti alliance

If the European Union was genuinely concerned with human rights, then it would have first and foremost stopped being an ally of the US, which has broken countless international laws. Spain’s government believes that it has taken a stance against injustice by refusing to sell arms to Cuba but it has only ended up exposing the nefarious agenda of the West.

Haftar calls the shot for “Election opportunity” in Libya