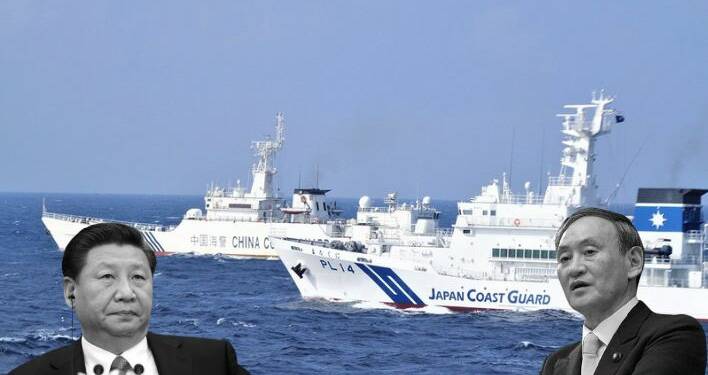 China is really shooting itself in the foot. Japan is set for a leadership change. Prime Minister Yoshihide Suga is set to step down soon, and by next month, Japan will have a new leader. Shinzo Abe was a China hawk. Same was the case with his successor, Suga San. Now, Yoshihide Suga’s successor is also slated to be anti-China. All prospective successors to Prime Minister Suga are making it a point to heighten their anti-Beijing rhetoric, as that has now become a prerequisite to qualifying for the prime minister’s post in Japan.

Fumio Kishida, a prominent candidate for LDP leadership, vowed on Monday to counter China’s growing influence by working closely with the US and other “like-minded” democracies. He promised to create the post of special advisor to the prime minister on human rights issues if elected, and this advisor would deal with China’s alleged human rights abuses in China’s Xinjiang and Hong Kong. Sanae Takaichi, former internal affairs minister and a close aide of Shinzo Abe has also said she would introduce policies to fend off China’s technological threat to help strengthen the economy.

Recently, a Chinese ship rammed itself into a Japanese coast guard ship near the Senkaku Islands, and Beijing later claimed that it was being modest with Japan by only ramming a ship into one of its vessels, and not taking some other radical measures. Tensions are running high between Japan and China, as the coast guard confrontation between the two countries came in the immediate backdrop of a Chinese submarine sailing in the waters off a southern Japanese island.

Chinese and Japanese coast guard ships recently had a confrontation over disputed territory. It ended with a #ChineseShip ramming itself into a #JapaneseShip.

As per the Japanese Defence Ministry, Japan’s Navy identified a submarine sailing Northwest just outside territorial waters near Amami Oshima island, part of Kagoshima prefecture. A Chinese destroyer was also spotted in the vicinity, and therefore, it is almost clear that the submarine identified by the Japanese Navy was a Chinese submarine.

The Japanese Defence Ministry statement released on Sunday disclosed that the Chinese vessels were identified in Japan’s contiguous zone, which is outside the territorial waters of a country but where vessels are still required to identify themselves. Yet, the Chinese submarine did not do so.

China, under the Communist regime of Xi Jinping, has become an uncivilised nation whose military bullies other nations in the East and South China Seas on a daily basis. China’s heightened aggression is what is leading to the production of anti-Beijing leaders in Tokyo.

Having ensured that every Prime Minister of Japan henceforth is a China hawk, Beijing is now resorting to outraging via its state propaganda outlets. Global Times, for instance, in a piece titled, “China-bashing in LDP election poor move; ties hard to fix for new leader” said, “Analysts have warned that Japanese politicians’ harsh rhetoric for winning election is one thing, but “toxic” hawkish anti-China rhetoric will poison Japan’s overall relationship with China. At that time, the next Japanese leaders will encounter tremendous difficulty when they attempt to mend fraying ties. Those anti-China remarks will be like time bomb for one’s political career, as those politicians won’t be able to fulfill their pledges no matter who takes office.”

Going to Get Nasty for China Now

China has laid the ground for Japan getting a continuous stream of anti-Beijing leaders, who will rise to the post of Prime Minister, and will make life miserable for Xi Jinping and the CCP. China’s military aggression against Japan is really going to be the worst mistake which the red rogue country makes in a long time. Already, prime ministerial candidates are committing to hiking defence spending, appointing a committed human rights advisor who will provide them exclusive information about China’s human rights abuses, and leaders who will positively reinforce Japan’s existing alliances with the democratic world, while also building new coalitions in the Indo-Pacific to take on China.

Read more: Every PM contender in Japan is a bigger China hawk than the previous one

China is very well aware that Japan will now see a stream of Prime Ministers which have one mandate alone – to destroy Chinese designs across the Indo-Pacific, whether they be in and around the Senkakus, Taiwan or against ASEAN nations.

Already, Japan has drawn a red line for China. Japanese Defence Minister Nobuo Kishi, speaking to CNN, said the Senkaku Islands are unquestionably Japanese territory and would be defended as such, with Tokyo matching any Chinese threat to the islands ship for ship, and beyond if necessary.

China’s actions against Japan are going to cost it big. They are yielding no real results for Beijing, apart from only turning everyone in Japan against China and making sure every Prime Minister who takes over the country gives Beijing hell.