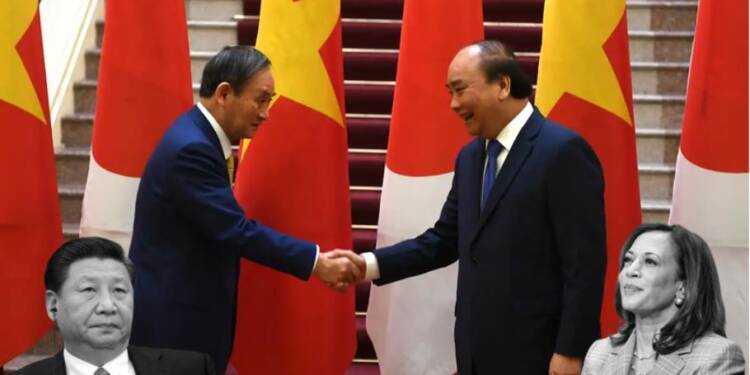 During the Trump era, the United States of America was the main power driving the Indo-Pacific region. The US was the one who assured the Association of Southeast Asian Nations, that is the ASEAN, against Chinese belligerence, while also inspiring them to take on the China ‘threat’. However, with US President Joe Biden and Vice President Kamala Harris doing irreparable loss to America’s image as a protector of the free world against authoritarian powers, Japan is assuming the onerous role.

Last month, Biden’s abrupt withdrawal of US troops from Afghanistan and Kamala’s disastrous tour to Southeast Asia sparked fears of receding US commitment to counter growing Chinese hegemony in the Indo-Pacific. In order to soothe the panic created by the Biden administration’s disastrous actions, Japan has now moved to reassure Vietnam against Chinese belligerence.

Japan is preparing to embolden Vietnam against an increasingly belligerent China. Tokyo and Hanoi signed an agreement on Saturday to enhance bilateral military cooperation.

The Japan-Vietnam military cooperation deal signed during Japanese Defence Minister Nobuo Kishi’s first trip overseas enables Japan to transfer its defence equipment, technology and ships to Vietnam. The Southeast Asian nation has become only the 11th country in the world to sign a defence equipment and technology transfer deal with Japan.

During an online news conference, Kishi disclosed that Japan will expedite talks with Vietnam to sell Self-Defense Forces’ vessels to the Southeast Asian nation engaged in deep territorial conflict with China in the South China Sea region.

Yi wrapped up his visit by saying that China plans to donate 3 million vaccine doses to Vietnam. However, Yi’s thunder was stolen by Kishi’s outreach to Vietnam and plans to sell naval assets and other defence equipment to the Southeast Asian nation.

Both Japan and the United States of America are supposed to stand for similar values of democracy, rule of law and international comity in the Indo-Pacific region. As such, Tokyo and Washington are the two biggest powers in the region, and the US is a much bigger military power than Japan. So, ideally, it is the US which should be indemnifying Vietnam and the rest of ASEAN against Chinese aggression.

However, a comparison between Kishi’s Vietnam tour and Kamala’s Vietnam tour speaks volumes about where the two nations stand. While Kishi underscored the need to counter Chinese hegemony in the South China Sea, Kamala seemed to accept China’s supremacy.

To add to Kamala’s woes, she had to visit Singapore and Vietnam last month, in the backdrop of America’s abrupt Afghanistan withdrawal. The shoddy execution of US troops pullout from Afghanistan had already raised suspicions about Washington’s ability to defend its allies against authoritarian powers like China.

During her Hanoi tour, Kamala had signalled that the Biden administration only views Beijing as a competitor and also welcomes competition with the Communist nation.

The US Vice-President had also said that “We are going to speak up when there are actions that Beijing takes that threaten the rules-based international order.” Again, her message was defeatist and seemed to exonerate China for its past misdeeds.

Japan’s Defence Ministry said that Kishi and Giang agreed on the importance of ensuring freedom of navigation and overflight in the Indo-Pacific, as well as cooperating in defence areas like cyber security. The statement is, of course, aimed at China which impedes freedom of navigation in the South China Sea and also operates a “hacker army“.

Kishi expressed strong opposition to “any unilateral attempts to change the status quo by coercion or any activities that escalate tensions,” in a reference to Chinese military aggression in the South China Sea and the East China Sea.

It is no doubt true that the decline in American influence in the Indo-Pacific leaves the ASEAN vulnerable to Chinese aggression. However, Japan has already rushed to save Vietnam and other countries in the region with Kishi’s successful Hanoi visit.