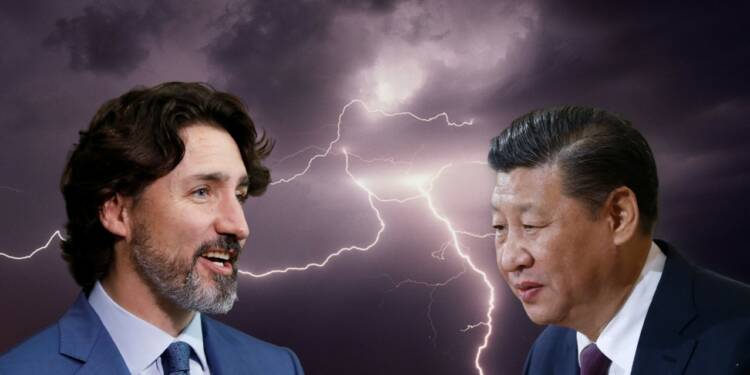 China has a brand new enemy- Canada. And China simply cannot believe this. Justin Trudeau used to be a pro-China leader but he has made three moves that have shocked China irreparably-

Trudeau under pressure to take on China

Trudeau himself is under a lot of pressure. He has been caught red-handed trying to help China with moves like letting Chinese companies exploit the Canadian Emergency Wage Subsidy (CEWS) program, an initiative to provide pandemic wage support to Canadian businesses.

Now, Trudeau must act tough on China. Because no matter how much Trudeau loves China, Canadians absolutely hate the Communist nation. Trudeau knows that if continues his softball approach against China, he will not be able to save his political career, and this is why he is changing his China policy.

Therefore, the Canadian PM started taking an anti-China turn by the fag end of last year. He accused China of cleverly “playing” Western nations. Trudeau said, “We need to do a better job of working together and standing strong so that China can’t play the angles and divide us one against the other.”

How do you show that you are acting tough against China or any other evil force for that matter? You bring in a man or a woman who owns and advances your cause aggressively. Trump appointed Mike Pompeo as then US Secretary of State and became the biggest anti-China hawk to date.

Now, Trudeau is trying to find his own Pompeo. And he has selected Jody Thomas for the job.

Jody, a veteran public servant, views China as a threat to Canada. She is currently Deputy Minister of National Defence and is replacing incumbent Vincent Rigby as the National Security Advisor.

Jody hates China and this is her biggest qualification. She understands how nasty China can get and last year, she warned that Beijing was turning its attention to China’s Northwest Passage as a melting Arctic opens up shipping lanes and resource exploitation.

Jody had said, “We should not underestimate at all that threat of resource exploitation in the Arctic by China in particular.” She had added, “China has a voracious appetite and will stop at nothing to feed itself, and the Arctic is one of the last domains and regions left and we have to understand it and exploit it more quickly than they can exploit it.”

Jody understands China really well. And to counter China on the Arctic front, she had suggested, “The deployment of the Navy in particular to the South China Sea is one of the messages that can be sent.” The veteran public servant had added, “[The deployments] are about the rules-based order and freedom of navigation, the freedom of the seas and the fact we will not be bullied into changing the geography of the world.”

And guess what? Trudeau has taken Jody’s advice. Canada is reportedly going to participate in the multinational exercise Sea Dragon at Guam in the Western Pacific. The US-led military exercise will involve the Quad nations and South Korea apart from Canada.

Canada’s message to China is loud and clear- if you want to bully us in the Arctic, we are ready to join hands with your enemies in the Western Pacific.

Meanwhile, there is another big news coming from Canada. China Mobile has released a statement reading, “In compliance with the request of the Canadian Federal Government, CMLink of China Mobile Canada, will cease operations on January 5, 2022.”

The Trudeau government had asked China Mobile in August last year to divest or liquidate its Canada business within 90 days. China Mobile had then dragged Trudeau to the courts to have the order shelved but its application was ultimately rejected.

Also Read: How Trudeau went out of his way to save China Mobile from Trump’s wrath

So, Canada has shocked China irreparably. And Ottawa’s latest actions make it clear that China will not be allowed to do business in Canada and that Canada will not let China harm Canada’s national security interests either.