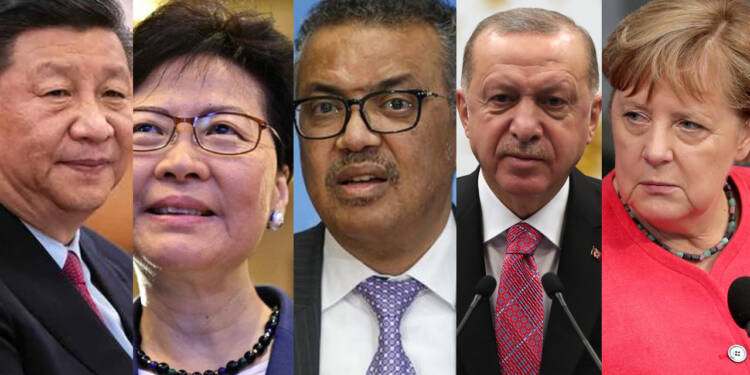 2020 is about to end and there is not much to rejoice about this year. Going down as one of the worst years for humankind in recent memory, all we can hope is that 2020 ends without any further shocks. Yet, we shall give you a small recap about the five people who made 2020 as awful as it is.

This should be a no-brainer. Right at the beginning of 2020, we came to know that China has manufactured a deadly virus. Soon, we also came to know that the Chinese President was hiding the Pandemic for more than a couple of months, putting millions across the world at risk.

As if the Wuhan virus was not enough, Xi started duping the entire world. Having already exported the deadly virus, China also started selling faulty Personal Protective Equipment (PPE), masks and other substandard medical equipment to other countries. Xi was actually using the Chinese virus to sell ‘made in China’ trash.

Having lost whatever soft power, China still enjoyed, Xi decided to turn expansionist. Chinese belligerence first cropped up in the South China Sea. Then, Chinese vessels also started intruding into Japanese waters near the Senkaku Islands in the East China Sea. Finally, the Chinese People’s Liberation Army got locked into a standoff against the Indian Army in Eastern Ladakh at the LAC.

In between, Xi’s China kept bullying other parts of the world. Chinese diplomats and State media continue badmouthing other powers like France and Australia. In between, Xi also enforced the National Security Law in Hong Kong that robbed the city of all its liberties and freedoms.

Today, China is locking horns with multiple countries in the Indo-Pacific, imperiling regional security. The Chinese virus meanwhile has killed more than 1.7 million people across the world.

Xi Jinping may have robbed Hong Kong of its liberties. But it would not have been possible without Carrie Lam, the Chief Executive of Hong Kong. When Hong Kong was being invaded by the Xi-led Chinese Communist Party (CCP), one would have accepted Lam to stand up for the city. But the Hong Kong Chief Executive proved to be a CCP loyalist instead.

As Xi imposed the draconian National Security Law upon Hong Kong, Lam pledged to “fully cooperate” with Beijing over the national security law as Lam in a statement said that the local government would, “complete the legislation as soon as possible to discharge its responsibility”. She continues to do Beijing’s bidding, even though it is well known that the CCP destroyed Hong Kong, which was once the epicentre of the Asian financial market.

The World Health Organisation (WHO) Director-General, Dr Tedros Adhanom Ghebreyesus has turned out to be yet another facilitator in Xi’s nefarious designs. While China was trying to manufacture a Pandemic, the WHO remained complicit in China’s crimes.

WHO misled the world on every front- delayed warning about human-to-human transmission, understating the fatality rate, advising people against using masks and recommendations against imposing travel restrictions on China, almost everything that the WHO did only aggravated the COVID-19 crisis.

While China’s President was this year’s showstopper, his Turkish counterpart almost matched him in terms of belligerence.

Today, Turkey is one of the biggest threats to global peace and security. Erdoğan has waged wars on all fronts in West Asia. It started with his support for the radical-Islamist Government of National Accord (GNA) in Libya. Then, Turkish belligerence reached the Eastern Mediterranean. Turkey started asserting naval aggression against Greece and Cyprus before the French President Emmanuel Macron decided to cut Ankara to size.

In the South Caucasus, Erdoğan decided to ignite the Nagorno-Karabakh conflict by abetting Azerbaijan against Armenia, despite opposition from the US, France and Russia.

Meanwhile, at a domestic level, Erdoğan has destroyed Turkey’s democratic ethos, secular principles and economic prosperity. The wannabe Khalifa’s brand of political Islam is thus becoming a grave threat for Turkey as well as the entire West Asia region.

While the world remains focussed on Chinese aggression in the Indo-Pacific, German Chancellor Angela Merkel turned out to be one of the many leaders who enabled Chinese hegemony.

From the very beginning, Germany made it clear that it wanted to change China through trade, even if it meant turning a blind eye to serious Chinese human rights violations.

The German Chancellor, who is also the de facto EU leader, forced the entire Continent to turn pro-China. Many times, the EU was caught watering down criticism against China, presumably under the weight of Sino-German ties.

The EU was supposed to represent the democratic world against an authoritarian China, but the intergovernmental body seems to have simply let China force itself upon Brussels. And Merkel is going to be seen as the leader who enabled such spineless behaviour by the Brussels-based body.

2020 is hopefully going to end without more disasters. But the world must not forget the five powerful personalities who have slipped the planet into the awful situation that it finds itself in.