In a massive blow to Beijing, Japan is arming itself with Nuclear Submarines 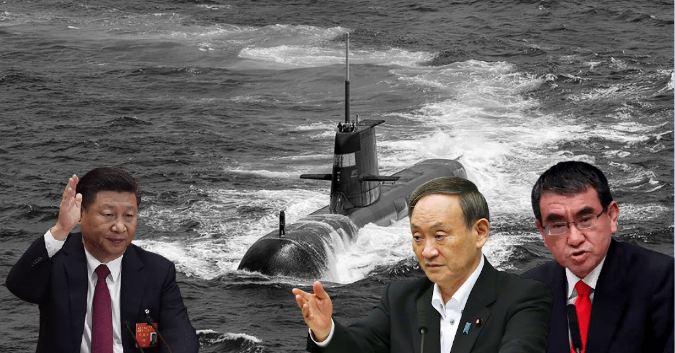 China is facing consecutive blows in geopolitics and military tussles- first, Australia armed itself with nuclear-powered submarines as a part of the AUKUS deal with the UK and the US. And now, an increasingly resurgent Japan is also looking to arm itself with nuclear submarines. And this is ultimately bound to corner China in its own backyard.

Poll leader Taro Kono, Minister for Administrative Reform and in charge of vaccine distribution, suggested a clear yes. He said, “As a capability, it is very important for Japan to have nuclear submarines.”

Kono added, “Whether there are regions [in Japan] willing to host them as a home port, or whether the operating capabilities or costs are pragmatic, these are issues we need to consider going forward.”

Shinzo Abe-backed candidate Sanae Takaichi, who is also a former Internal Affairs Minister said, “If we think of the worst-case risks in the international environment ahead, I do believe we could have [submarines] that can travel a little longer.” Importantly, Abe’s protégé also said that she did not think that nuclear-powered submarines were unconstitutional.

Other candidates- LDP policy chief Fumio Kishida and Seiko Noda, the LDP’s executive acting Secretary-General, seemed to oppose acquiring nuclear submarines. However, given the geopolitical situation in the Indo-Pacific, the electoral situation in Japan and the atmosphere in LDP, even the other two candidates will have to budge on the issue and ultimately embrace nuclear submarines.

Purported of Japan will to acquire nuclear submarines is an indication of some larger designs. Nuclear-powered submarines aren’t necessarily nuclear-armed though they are more efficient than conventional or diesel-electric submarines. They can stay underwater for longer durations due to nuclear propulsion, which is completely independent of air and liberates the submarine from the need to surface frequently.

Japan has been a pacifist country since the end of World War II. For a long time, Japanese political leadership was averse to developing offensive military capabilities leave alone making nuclear weapons.

However, with a nationalist right-wing leader like Shinzo Abe coming to power and China turning increasingly belligerent, Japan has been more than ready to dump its pacifism. It has been spending heavily on the military forces and developing offensive weapons to arm itself against Chinese aggression.

China and Japan locking horns with each other

The Sino-Japanese tensions have been spiralling uncontrollably over the recent past, with Tokyo openly supporting Taiwan’s case against China, and Beijing threatening to concentrate its military firepower in the Japanese waters near the Senkaku Islands. Japan needs some kind of leverage to keep China in check and when it comes to strategic leverage, nothing goes as far as an offensive nuclear programme.

For Japan, developing offensive nuclear capabilities is not completely impossible. A Japanese nuclear programme existed in the pre-World War II era, but it got stalled and Japan’s surrender meant that the pre-War nuclear programme reached a dead end.

However, Japan is a technologically advanced nation today with adequate means to develop offensive nuclear capabilities at will. Also, Tokyo understands that the protective umbrella, which allowed it to remain a pacifist country, is no longer as strong as it used to be.

With the Biden administration going soft on China, Japan understands that the US will not push back against Chinese belligerence in the Indo-Pacific as fiercely as it used to do during the Trump era.

With China flexing its muscles in the region, Japan has to step up to the task of containing the paper dragon. So, Japan is sending a message to China and it is nuclear- if Beijing doesn’t stop its expansionist policies, Japan won’t hesitate to exploit nuclear leverage against the Communist nation.

In a sucker punch to One China policy, India ties up with Taiwan for crucial semiconductor partnership