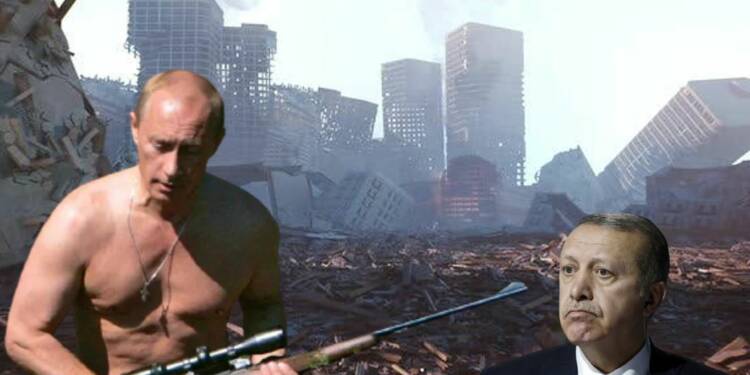 Russia has been tolerating Turkey’s antics for quite a long time now. Under a madman like Recep Tayyip Erdogan, Turkey has become an Ottoman revivalist country – the one in which Erdoğan sees himself as the Khalifa. Unfortunately for him, Russian President Vladimir Putin is drawing inspiration from the Russian empress Catherine the Great. Putin is really positioning himself as the new Tsar of Russia, and in such a time, Ankara should have ideally steered clear of Moscow. But being the country with unnatural goals that it is, Turkey has overstepped big time now. Turkey has just armed Ukraine with lethal drones, and Ukraine has begun using them to target Russian interests.

On Tuesday, the Ukrainian military announced that it had destroyed the artillery of pro-Russian separatists in the country’s east, in its first ever combat deployment of a Turkish drone. Footage published on the Ukrainian armed forces’ Facebook page showed the Bayraktar TB2 targeting and shooting a Soviet-era howitzer it identified as the pro-Russian forces’ D-30. According to the Moscow Times, Ukrainian armed forces accused the separatists of wounding one soldier and killing another with the D-30, near the eastern town of Hranitne on the front line.

Russia is not happy. In fact, Moscow is more annoyed than Turkey would ideally want it to be. On Wednesday, a day after Ukraine’s maiden offensive using Turkish drones against Russian proxies, the Kremlin said that its fears about Turkey’s decision to sell strike drones to Ukraine were being realised and that the Turkish drones risked destabilising the situation in eastern Ukraine. Importantly, Russia made it a point to mention that the Turkish drones are a destabilising force in the region, more so, given Moscow’s “special” relations with Ankara.

Turkey asking for a beating of its fifetime:

Turkey has crossed a red line. For its Bayraktar TB2 drones to be used by Ukraine is nothing short of a national security risk for Russia. What’s worse is that Ukraine has used these drones against pro-Russian rebels, and the consequences can prove to be catastrophic for Ankara. Last month, the Ukrainian government announced that it is planning to buy 24 more Turkish unmanned combat aerial vehicles. This came after Turkey delivered the first batch of the TB2 drones to Ukraine in July.

What has also enraged Moscow is the fact that Ukraine and Turkey signed a memorandum in late September to establish a joint training and maintenance centre for the drones in Ukraine. Only this month, Ukraine’s foreign minister said plans are afoot to build a factory, to produce Bayraktar drones in the country. This would really ensure an unlimited number of armed drones filling the Ukrainian arsenal, and Russia is expected to act before it is too late.

Meanwhile, also in September, Turkey rejected the parliamentary elections held in Crimea, which Russia annexed from Ukraine in 2014, underlining the country’s support for Ukraine’s territorial integrity.

If Turkey thought it could land its drones right on Russia’s doorstep and get away with it, it’s really in for a big surprise. On his part, Putin has already set the ball rolling. As reported by TFI recently, within Russia, there is a renewed vigour with which important figures are staking claim of Turkey’s eastern provinces. Recently, in a subtle but severe message to Turkey, the editor-in-chief of the Russian state TV channel RT said Russia should annex eastern Turkey’s Mount Ağrı (Ararat) and Kars province. According to the Daily Sabah, Simonyan’s controversial comments followed similar remarks by Russian politician and leader of the Liberal Democratic Party of Russia Vladimir Zhirinovsky, who claimed that a “special” tsar-like regime was necessary to secure Armenia.

TFI had also explained earlier this year that in times of conflict with Russia, Ukraine would use its Turkish drones against Moscow-controlled Crimea. Interestingly, the Crimean Peninsula opens into the Black Sea – across which lies Turkey. Therefore, by arming Poland and Ukraine, Turkey is, in fact, trying to subdue Russia’s influence and might in the region.

Russia will not take Turkish attempts to undercut its influence lying down. Russia, by having openings into both the Baltic and Black Seas, has also been able to get hold of warm water ports for itself. Moscow depends on the Black Sea for access to the Mediterranean and beyond, both for military operations outside its immediate neighbourhood and for exports of Russia’s main commodity – hydrocarbons.

As it turns out, Erdogan is not only arming Ukraine with drones, but he is also trying to take complete control over the Black Sea. Erdoğan now wants to revive a medieval-era project called the Istanbul Canal, with the aim of controlling the Black Sea.  In a short span of time, Turkey has taken a number of steps which have enraged Russia, and the collective wrath of Moscow promises to destroy Erdogan very soon.

Not the First Time Russia Would Humiliate Turkey:

Russian President Vladimir Putin knows how to cut Erdoğan to size. He is now mounting trouble for Erdoğan on two fronts – Azerbaijan and Syria. In Syria, Russian support for the Kurds is really leading to sleep deprivation for Erdoğan. Erdoğan hates Kurds because Turkey faces Kurdish insurgency led by the Kurdistan Workers’ Party (PKK) within its own territory and sees an autonomous Kurdish government and its militias – People’s Protection Units (YPG) across the border in Syria as a security threat for itself.

Read more: Kurds in Syria and Iranians in Azerbaijan – Turkey set to face the heat at two fronts with Putin’s imprints all over it

After the US withdrew its forces from Syria in 2019, the Kurdish administration in Syria decided to align itself with Russia and the Bashar al-Assad administration in Damascus. Almost immediately, Turkey had launched a brutal attack on Kurdish-held towns in northeast Syria. However, Putin sternly intervened and put a stop to Turkish atrocities against the Kurds. Ankara and Moscow reached a deal that involved bringing in Syrian military forces to the adjoining areas, and reducing Turkish presence to two small towns alone.

Turkey agreed to the deal on the promise that all members of the Kurdish People’s Protection Units (YPG) and their arms “will be removed”. However, this hasn’t happened. So, Turkey has been effectively limited to a small area in northeast Syria whereas the Kurds continue to hold on to the area from which Erdoğan wanted to displace them. Essentially, Erdogan has been taught a lesson by Putin in Syria, already.

In Azerbaijan too, Iran is leveraging its relationship with Russia to force Turkey into submission. Turkey lacks a direct link to Central Asia, a region, considered to be Russia’s sphere of influence, and the only roadblocks are Armenia and the Nagorno Karabakh region. Attacking Armenia and taking control of the Nagorno-Karabakh is therefore, a part of Erdoğan’s dreams to unite the Turkic world from Central Asia to Turkey under Ankara’s leadership. Russia has made Iran a party to the conflict between Turkey-Azerbaijan and Armenia, and Erdoğan cannot fathom how he now faces the prospect of taking on Russia, Iran and Armenia collectively instead of bullying Yerevan alone.

But that is how Putin operates. And given Turkey’s recent moves, something much bigger is headed its way, and all it can do is try and duck.