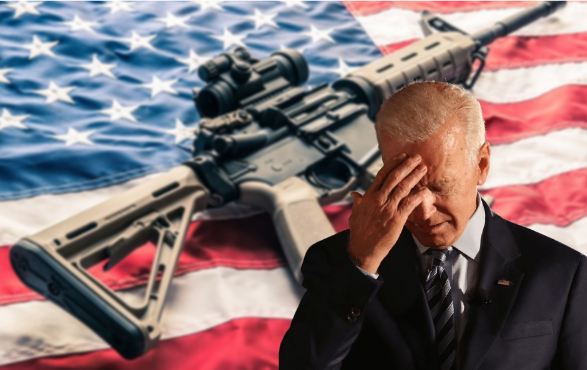 Former US President Donald Trump is often ridiculed as a transactional President by the Democrat ecosystem. Well, Trump was quite honest in his foreign policy- rewarding loyal allies and castigating those who were trying to double deal with the United States of America. Trump pulled the US military out of several wars and let the US allies fight their wars with American arms supplies.

Yet, the Democrats criticised Trump for his foreign policy and arms transfer strategy.

But what is Biden doing now- he is slowly usurping complete authority over US arms transfer, aligning it with his agenda and ensuring that his administration can sell weapons to some of the most gruesome human rights abuses in the African Continent.

US President Joe Biden is looking to revise the US arms transfer policy. The narrative being pushed by American liberals is that Biden will punish human rights abusers and cut down on American weapon sales. Well, you can live in fool’s paradise if you want or otherwise we can dissect the truth. What is not being discussed at length is how Biden is looking to reverse a decision by the Trump administration to shift control of certain firearms and munitions from the Department of State to the Department of Commerce.

Again, left liberals used to label control of weapons by the Department of Commerce as transactional. However, if Biden is shifting control of such firearms and munitions to the State Department all over again, then it is bound to have certain interesting implications. For starters, it means that US weapon transfers till 2024 will be guided totally by Biden’s foreign policy priorities and this is where it gets murky.

If Biden hates a leader, he will become a gross human rights abuser automatically and therefore disentitled to American arms. On the other hand, even the most gruesome of human rights violators can pass off as benevolent leaders and easily import sophisticated American military equipment.

Biden looking to trigger a ‘Horn of Africa Spring’:

First things first, Biden is eager to destabilise the Horn of Africa by instigating and fomenting regional conflicts, just like Obama had initiated the Arab Spring to destabilise Middle East regimes in a bid to shore up American influence. Biden is therefore likely to use American arms transfer policy for instigating conflicts in the strategically crucial Horn of Africa.

Take the country of Ethiopia for instance. Ethiopia has taken centre stage as the focus of the world shifts to the Horn of Africa. Ethiopia is currently facing a rebellion in its northernmost region of Tigray. The rebellion is led by a group called the Tigray People’s Liberation Front(TPLF). The Biden administration claims that Ethiopia’s forces and officials are committing human rights violations in Tigray, and therefore, the U.S. must get involved with a ‘humanitarian intervention’.

If Biden gets too desperate, we cannot even discount the possibility of the Oval Office reaching out with arms supplies to the TPLF in a bid to downsize Ethiopia. A desperate Biden recently tried using a base in Djibouti to launch attacks on Ethiopian forces and assist the TPLF in its endeavour to capture the capital city of Addis Ababa. But Djibouti denied the US to use its territories for assault on other countries leaving Washington embarrassed.

Biden has also tried to instigate Sudan into a war against Ethiopia. The US has appointed an ambassador to Sudan for the first time in 25 years after Washington upgraded its diplomatic representation with Khartoum from chargé d’affaires to ambassador. While Sudan has stayed away from the current crisis in Ethiopia, this action by the USA just after the short-lived military coup in Sudan tells us how Washington is making use of Sudan to fulfil its agenda, after being denied passage by Djibouti for an intended attack on the elected government of Ethiopia.

In North Africa, Biden is trying to push Morocco and Algeria towards a full-blown war. Trump had recognised Morocco’s sovereignty over Western Sahara, a disputed territory in which Morocco enjoys de facto control and Algeria supports the Polisario Front, a politico-military organisation seeking independence. The sitting US President had however tweeted a map in August containing the White House logo that did not take into account the December 2020 recognition of Morocco’s sovereignty over Western Sahara. The tweet was deleted later, but it had already emboldened Algeria and its militias in the disputed region.

Biden to abandon US allies:

While Biden is likely to support separatist groups and rogue regimes in Africa, he is likely to abandon long-time US allies with the State Department taking control of the US arms transfer policy. Since the very beginning of his Presidency, Biden has pushed an agenda that involves abandoning Saudi Arabia over allegations of human rights violations by Saudi Crown Prince Mohammed bin Salman (MBS) including the murder of journalist Jamal Khashoggi. Biden has already pulled out of the Yemen war and is now likely to pause arm sales to Riyadh.

Going further, Biden may even pause arm sales to Saudi’s close regional ally- the United Arab Emirates or even the Jewish nation of Israel, given the extent of support that far-left Democrats have shown for the Palestinian cause. Biden himself has been at odds with Israel over issues like the Iran nuclear deal, which can further push him to downplay the US-Israel alliance and use wide, unfettered discretion in the arms transfer policy.

The Biden administration is thus monopolising control over weapon sales. This paves way for the American military-industrial complex to sell weapons to rogue regimes while abandoning long-time US allies.