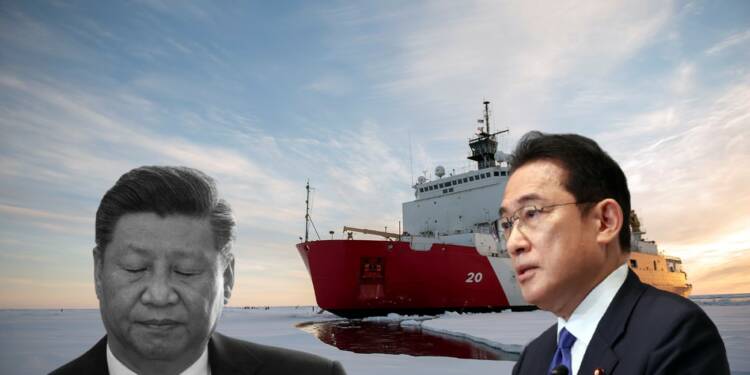 Things are looking bleak for China in the Arctic. First, it was just Russia that was ready to give it a bloody nose in the region, and now even Japan has entered the Arctic with a single objective- choking Chinese ambitions.

Japan has begun work on its first icebreaker that will be able to conduct Arctic research throughout the year, even when the sea is frozen. The 128-metre icebreaker is going to give Japan a huge advantage in a region that Chinese President Xi Jinping plans to take over amidst changing climate and melting polar ice cap. Apparently, the man thinks that he can stake claim over any nook and corner of the world.

The 13,000-ton monster of a ship with which Japan wants to make a stunning entry in the snow-capped region is being built by Japan Marine United and is based on a design from the Japan Agency for Marine-Earth Science and Technology.

The $295 million icebreaker is slated to set sail from April 2026 and will carry a sizeable crew of 99 people for 40 to 50 days. It will carry all necessary equipment to study the Arctic seafloor and biological resources, as also the oceanic and atmospheric measurements.

By entering the Arctic, Japan is giving a big message- we are not living in the past, and we are not going to stay pacifist. Tokyo is shedding its post-World War II defensive mentality that involved only raising defence forces and not looking at the outer world.

Japan will no longer remain a docile nation in face of an aggressive China. If Chinese ships intrude into waters near Japan’s Senkaku Islands, then Japanese ships will survey the Arctic and challenge growing Chinese ambitions in the region.

Read more: Japan has shunned its pacifism very openly and China needs to be extremely scared of it

Gloves are coming off and Japan is targeting the region where Chinese militarism is bound to peak in the near future- the Arctic.

Japan’s presence in the Arctic is really an evidence of how Russia-Japan ties are going ahead.

As such Russia and Japan are getting closer to a peace treaty. The two countries do have an old issue in the Kuril Islands dispute, where four Russia-controlled islands are a bone of contention between Moscow and Tokyo. However, it is not something that cannot be resolved.

In fact, Russia and Japan are ready to cooperate with each other. An India-Russia-Japan trilateral, in particular, seeks to speed up development in the Russian Far East, another territory claimed by none other than Xi Jinping.

Read more: As Russia joins hands with India and Japan, China grows wary of its investments in Russian Far East

As soon as he came to power, Japan’s Prime Minister Fumio Kishida made it a point to expand cooperation with Vladimir Putin. As per a Japanese Foreign Ministry statement, Kishida stated that “he would like to develop overall Japan-Russia relations in a mutually beneficial manner, including the issue of concluding a peace treaty.”

Now, we know that the Japan-Russia alliance is coming closer to reality. Japan’s Arctic entry is a signal of support to Moscow. While Russia is a big Arctic power, it hates how China calls itself a ‘near-Arctic State’ and plans to take control of the region. We are actually looking at the possibility of a new era in which Russia and Japan can take on China in the Arctic jointly.

And while Putin would love to see Kishida send Japanese experts into the Arctic, Japan’s entry into the region would also be welcomed by other Arctic powers and allies like Canada, the United States and Germany.

In fact, Japan already cooperates with Germany and Canada in the snow-capped region. Japan’s Arctic agenda is going to radicalise the opinion against China in the region and this is actually a very bad news for the Communist nation.