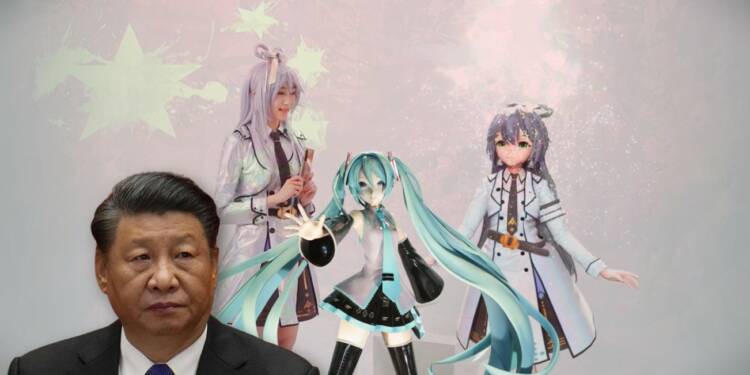 China is a dangerous country to live in. You may be just minding your own business, but your President may end up feeling that you have made an anti-CCP political statement. This is Jack Ma, the founder of Alibaba Group. He was simply managing his business empire when suddenly Xi Jinping perceived him as a threat and ended up hauling him over the coals.

Read more: CCP couldn’t kill Jack Ma, so they are trying to kill his image

So, if you show your face in China, you are in danger. The country has a crazy President who doesn’t even spare his party men. So, critics and businessmen are always at risk of being censored by Xi Jinping. This is why Chinese internet users are increasingly using virtual avatars to evade the CCP and this could as well pave way for an online revolution against Xi Jinping.

Virtual avatars pick up in China

Virtual you tubers don’t exist in China, because like all other social media apps, YouTube is also banned in China. But Chinese internet users love virtual avatars.

The industry is huge. Cheng Weizhong, the founder of a Chinese startup said, “Virtual hosts will become more popular because relying too much on influencers isn’t sustainable.” Cheng added, “The market is huge.”

You may think that such AI-generated animations lack personal touch. But it does the job for Chinese e-commerce websites.

Hiring social media influencers for Livestream retail sales is quite an expensive affair in China. Influencers demand high commissions of up to 40% of Livestream sales apart from daily service fees running as high as $78,000 in some cases.

And you never know when your hired influencer runs into trouble with government authorities. Viya, China’s queen of live streaming, for example, was handed a fine of US$210 million for tax evasion by CCP authorities in China’s e-commerce hub Hangzhou in Zhejiang. In fact, China’s Livestream celebrities are already running out of business as virtual avatars take over.

How virtual avatars could lead a revolution against the CCP

The advantage of virtual avatars is that they don’t have an identity. CCP authorities can’t identify someone and say- let’s punish him or put him in a detention camp. And this is what makes virtual avatars a possible tool to take on the CCP. Presently, Chinese youngsters are using it for business and tomorrow they could use it for criticising Xi Jinping.

In fact, Chinese censors have been caught napping up on Japanese anime in the past. In 2020, China suddenly realised that two virtual Japanese YouTube hosts Kiryu Coco and Akai Haato had included Taiwan on a list of countries that contributed the most to their subscribers. Even the national flag of the island nation was displayed.

This had enraged hard-line CCP supporters on Chinese streaming platform Bilibili, who flooded the page of the two virtual Japanese characters with angry remarks and requests for apologies.

This is what makes virtual characters extremely dangerous for the Chinese Communist Party. The fun virtual characters, which seem pretty innocuous, can easily turn into tools for expressing dissent against Beijing’s policies.

Presently, China cracks down on any social media celebrity it hates. Zhao Wei, a billionaire Chinese celebrity, is one of the examples. Censors also find it easy. They are given one personality to target and the CCP censors make it a point to delete that personality from the Chinese internet. But you cannot do this to animated characters.

Virtual avatars can therefore prove to be a monster of sorts for the CCP. They are already running Chinese businesses and soon they could turn into an uncontrollable revolution of sorts, with an aim to take down Xi Jinping’s evil regime.

Best Peer Pressure Quotes to share with your friends