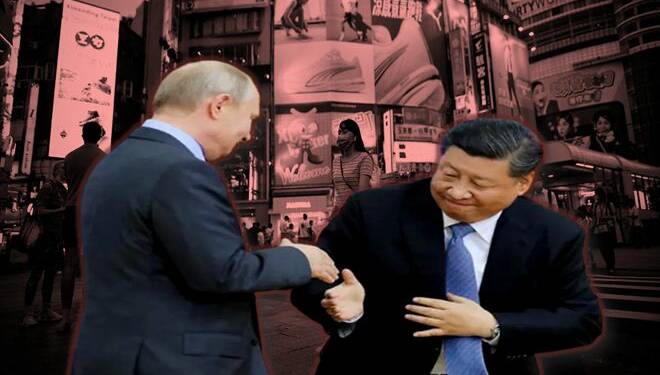 In the immediate past, there is no big geopolitical news to counter Putin’s meeting with Xi ahead of the Beijing Winter Olympics. It is being interpreted as the rise of an authoritarian axis.

The simplistic analysis and projection that followed was something like this- Russia invades Ukraine as the US doesn’t comply with Moscow’s demand to hinder any further eastward expansion of NATO. The Biden administration fails to act and the Afghanistan debacle repeats itself. The US loses the global leadership role and the episode culminates with a Chinese invasion of Taiwan. But as always the case with geopolitics remains overly complicated. And in this case, Putin’s actions could surprisingly drive Taiwan away from Xi’s hands.

Read more: The Afghanistan invasion and botched up retreat is a western conspiracy to destabilise India and Russia

Xi was desperate to find some diplomatic engagement and photo ops during the Beijing Winter Olympics and Putin adhered to it. What did Putin get in return? Yes, express support from Beijing for his strong stance against the eastward expansion of NATO.

So, if there was any doubt earlier, it is now clear that China won’t oppose any Russian attempt to invade Ukraine.

The US is losing its international reputation

Taking the case in point, last year, the US left Afghanistan and had the voyeuristic pleasure of watching helplessly as the Taliban took over the war-torn country.

Now, if Russia takes over Ukraine, it will be three big strategic disasters for the US within one decade. Most importantly, the US will no longer be seen as the superpower that can dictate global affairs. And this is exactly what Chinese President Xi Jinping is rooting for. In Xi’s mind, a Russian invasion of Ukraine will end the era of American security leadership in the world and pave way for the violent unification of China and Taiwan. But is it really the case?

The US is at a geostrategic advantage in both Afghanistan and Ukraine. In the case of Afghanistan, the US had to fight a war in a landlocked country with Pakistan on its East and Iran on its West. Entering Afghanistan through Iran wasn’t an option for American troops for obvious reasons and Pakistan literally took US money and arms to only turn against the US itself.

In the case of Ukraine, the US doesn’t enjoy much support from the European Union any longer. And in Eastern Europe, Biden’s attempts to instigate anti-Russia sentiment have backfired.

So, the US isn’t left with many options on the table when it comes to putting boots on the ground and landing military equipment to consolidate its position in the region. In case of a possible Russian attempt to invade Ukraine, Washington won’t be able to react prudently.

Now, let’s come to Taiwan. Taiwan isn’t located in a disadvantageous situation. As per the Asia power index, the US is the most influential power in the Indo-Pacific. Make no mistake; if China makes an attempt to invade Taiwan, there are several like-minded regional powers like Japan, Australia, India, Vietnam and Indonesia that are on hand to support a serious American response.

The US itself has ample military presence in the region with the Seventh Fleet of the US Navy capable of pushing in American aircraft carriers and submarines. Also, US military bases like Guam can be activated to send in American bombers for defending Taiwan.

Moreover, Biden himself won’t be ready to let China have its way. If Russia actually invades Ukraine, it will be a big blot on his track record as the US President, and a Chinese invasion of Taiwan will be the last thing Biden want to see.

In any such scenario, the US will react with unprecedented measures. It will end the era of US ambiguity on Taiwan issue and the Biden administration may even go as far as formally scrapping the One China policy.

US military strategist Edward Luttwak said, “To help Ukraine, we need infantry, anti-tank, etc. Any naval needs will be amply provided by the Atlantic Fleet. … In contrast, the U.S. needs aircraft carriers, submarines and bombers to respond to the Taiwan Strait, which is quite different.”

Luttwak added, “Even if it (an invasion of Ukraine) happens, the U.S. military’s ability to respond to Taiwan will not be significantly diminished.”

Invading Taiwan is already an unviable option for China, due to the geographical terrain of the island nation. But if the US has its back against the wall after a Russian invasion into Ukraine, China will have to face an angry and nasty American military. Putin could therefore make it impossible for China to invade Taiwan.

The greatest trick the devil ever pulled quotes to save yourself