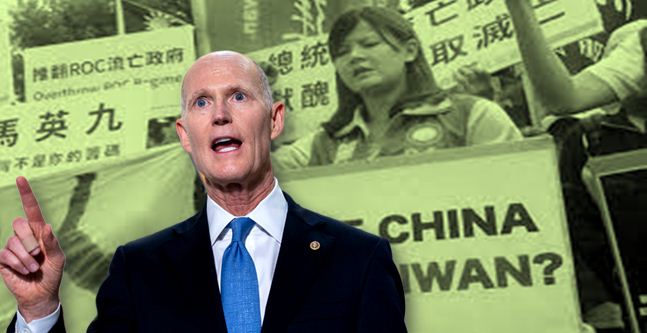 Taiwan seems unsafe under Biden’s Presidency. The 79-year old senile “remains committed to the “one China” policy”, shares sensitive intelligence on Ukraine and Russia with China, and even refuses to promise that the US military will intervene if China goes to war with Taiwan.

We have moved away from those good old days when China hawks like Pompeo were a part of the US administration. But showing some glimpse of hope, few China hawks are now trying to protect Taiwan from the US Congress. Three Republican Senators- Rick Scott, John Kennedy, and Kevin Cramer, have co-sponsored a bill to sanction China in case of a Taiwan invasion.

Read more:China can invade Taiwan amidst the Russia-Ukraine mayhem but will fail

The latest Bill brought by US lawmakers proposes to protect Taiwan from the China threat by use of financial sanctions against Beijing. The lawmakers said, “Passing this bill will make clear to General Secretary Xi that if he mimics Putin’s invasion, then he will be met with economic isolation and severe financial sanctions.”

Called the Deterring Communist Chinese Aggression Against Taiwan Through Financial Sanctions Act, the Bill states that it would “impose devastating financial sanctions on the Chinese government if Communist China dares invade Taiwan, or attempt to change the status of Taiwan’s governance through the use of force”.

The Republicans are now mounting pressure on the Biden administration over the Taiwan issue. On Friday, former US Secretary of State Mike Pompeo suggested that the US should diplomatically recognize Taiwan as “a free and sovereign country.” Pompeo made this suggestion during a visit to Taiwan.

For China, this would be quite a disaster. In case the Bill gets through, the EU will have to come up with a similar proposal. China’s total trade with the EU and the US stands at $1.6 trillion and Beijing could end the trade deal to ruins if they are fervent in their stand on invading Taiwan. The Republicans are thus escalating the costs that China would have to sustain if it even tries to invade Taiwan.

For the Democrat lawmakers, the latest Bill co-sponsored by Republican lawmakers is nothing short of a tough litmus test.

If the Democrats support the Bill, then it dilutes President Biden’s thinly veiled agenda of going soft on China. But if they do not support the Bill, then the voters will ask why they are going soft on the brutal CCP regime. And at the end of the day, Democrats cannot afford more damage to their image given their bleak prospects ahead of the mid-term elections in the United States.

In all probability, the bill to sanction China should get through. Biden had abandoned Taiwan but it seems that the island nation still has a few loyalists to count on in the United States who are working all the way to restrain the Chinese military through the US Congress.

Iran, US, Israel, Russia, and Ukraine: A drastic new development is taking place in West Asia