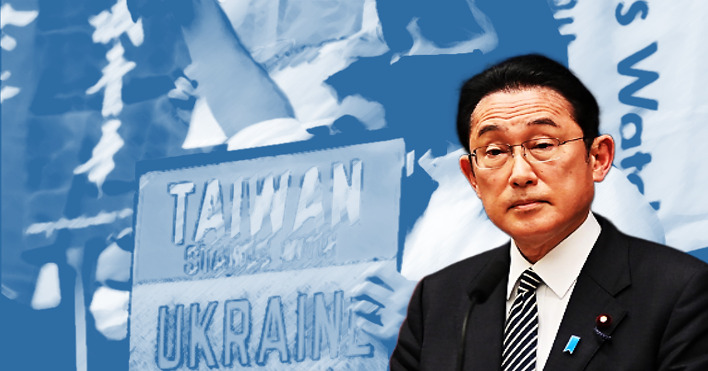 Japan is speaking tough on Russia’s Ukraine invasion. Tokyo has a clear message for China- you will not be spared if you even dare to set an eye on Ukraine.

When Russia invaded Crimea back in 2014, Japan just resorted to condemnation that was rather mild in tone. It was almost as if the Shinzo Abe government in Tokyo treated the Crimea annexation as more of a Western issue. Tokyo wasn’t even too enthusiastic to join the Western outrage against Moscow.

However, this time around, Japan is more active. It recently decided to freeze the assets of 17 Russians. The Japanese Ministry of Finance revealed that it has targeted dozens of Russian individuals till now. What explains this change in Japan’s reaction? Well, a Japanese expert may have an answer.

Yoko Iwama, an international relations expert, said, “The purpose of Japan’s response is to send a message that we will be ready and we will resist if there’s an invasion (of Japanese territory), that we will not allow the borders to be changed by force.”

Iwama added, “We don’t want a real war, the objective is political — that China is persuaded from an aggressive act like the one that Putin has taken in the last several days and weeks.”

In this context, former Prime Minister Shinzo Abe went as far as suggesting hosting US nuclear weapons on Japanese soil. It was quite unthinkable in Japanese polity till now, given the history of Hiroshima and Nagasaki.

Notably, Japan faces no direct threat from Russia. If it faces a threat of the level to warrant going nuclear, the credit goes to China. So, Japan is quite clear about one thing- if China makes a rash move, Tokyo can go as far as hosting nuclear warheads in Japanese territory.

Read more: So how powerful Taiwan really is – Politically, Militarily, and Economically

Finally, there is this issue of Taiwan. Japanese strategists do understand that the Chinese won’t make the mistake of attacking Japan. After all, the consequences that any such maneuver would entail would be too hot to handle for Beijing.

However, what China might try to do is aim for forceful reunification of Taiwan. And this is where Japan’s tough reaction following the Ukraine crisis becomes extremely relevant. Japan is suggesting that it is no longer an inward-looking power and if China invades Taiwan, then Japan will react.

Unlike Ukraine, Taiwan is closer to Japan’s strategic interests and Japan will do something more than impose sanctions on Beijing if China attacks the island nation. It was palpable from how Prime Minister Fumio Kishida jumped in to solicit efforts to make the Ukraine issue a matter of global concern. Kishida even said, “This is a very serious situation which doesn’t just affect Europe, but also Asia and the whole world order.”

In case, China makes a move on Taiwan, Japan will have many options to explore including cooperation with Southeast Asian nations. Also, other members of Quad can nudge the US to commit itself to Taiwan’s security.

Only in a recent meeting, Quad leaders agreed that the Ukraine episode should not be allowed to repeat itself in the Indo-Pacific. If China attacks Taiwan, the US can be asked to honor its word for the sake of its global reputation that has already taken a hit.