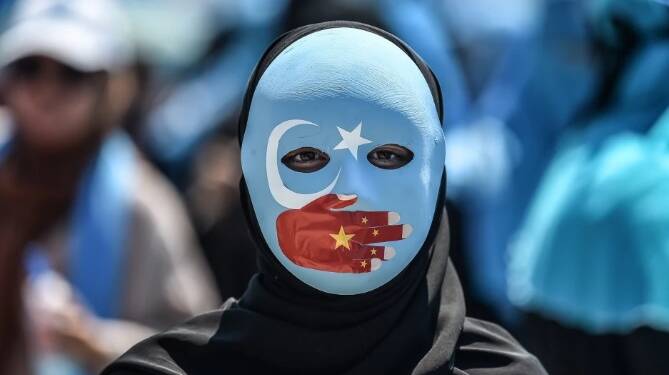 The entire world or at least the West is giving full attention to Ukraine. There is a lot of support for Ukrainians in Western mainstream media and social media accounts. Ukraine is presently under a Russian invasion, which explains the attention on Ukraine.

But there is another part of the world, which was invaded several decades ago and is presently undergoing an undeclared genocide. It is the erstwhile East Turkestan or what is now described as Xinjiang by China. Ethnic Uyghur Muslims, the original inhabitants of Xinjiang, also want to fight China like Ukrainians are fighting against Russia. But they have no backing from the world at large.

Presently, the West is backing Ukrainian President Volodymyr Zelensky and he has actually become a household name. With all the reports about assassination plots against him, Zelensky is being honoured as a hero.

But have you ever heard of Uyghur leaders who have actually been condemned by China and are presently getting tortured at the hands of CCP authorities? Sattar Sawut and Shirzat Bawudun are two such prominent Uyghur politicians.

You probably wouldn’t have heard of them. And you aren’t at fault, because there was hardly any reporting when the duo was sentenced to death. Their crime? Working for the Uyghur community. China, of course, described the charges as taking bribes and separatism.

Sawut and Bawudun are just two of many such Xinjiang bureaucrats, most of the Uyghurs, who have been sentenced on national security charges by China. Many of such leaders have been put in jails for their entire lives. Those fighting for the rights of Uyghurs have thus got wiped out without any hue and cry in the world at large.

And it’s not just the living Uyghurs who get ignored. Even the dead Uyghurs don’t get the attention they deserve. You get to read about all the civilian casualties in Ukraine. But what about the Uyghurs who are being slaughtered in Chinese concentration camps?

In 2019, 150 people died in one of the 380 Uyghur concentration camps operated by China. But no one wanted to talk about it and except for a solitary report in RFA Uyghur service based in the US, no one actually reported the gruesome incident.

Uyghur activists claim that over 500 corpses are dumped by Chinese authorities to their homes every day from the camps. Mainstream media doesn’t verify or report this. It doesn’t want to. Meanwhile, China runs a well-orchestrated genocide that seeks to eliminate the ethnic Uyghur community from the face of the planet.

And those who get to live in Xinjiang aren’t doing great either. Uyghur women are raped, sterilized forcefully and married off to the Han Chinese who occupy their homeland. The more unfortunate Uyghurs become commodities for black marketing and organ harvesting by the Chinese Communist Party. Beijing makes billions of dollars by harvesting organs of Uyghur Muslims.

Also, Uyghurs cannot even escape from Xinjiang. Vulnerable Ukrainians have been able to find a safe passage into Ukraine’s neighbouring countries. However, Uyghurs get deported back to China wherever they go. Even the self-acclaimed representatives of the Muslim world like Turkey and Saudi Arabia have given a cold shoulder to the ethnic minority.

Read more: From being an Islamic Republic, Turkey is heading towards being a Chinese colony

Uyghurs- the unfortunate victims who are not allowed to fight

No matter where you live, you don’t want to face an invasion from your neighbour. It leads to death, destruction and misery. But if you ask an Uyghur to choose between what they have in Xinjiang and Ukraine, they will choose Ukraine.

Ukrainians are at least getting to fight against Russia. However, Uyghurs are not even getting to fight against the genocide they are facing. The West is hitting Russia with sanctions and condemning its actions. Whether the sanctions will work or not is a different matter. However, Ukrainians are at least getting a lot of verbal support.

However, Uyghurs feel that their fight is a lot of cause. The UN doesn’t condemn China. The West doesn’t slap tough sanctions on China, nor does it cut Beijing off the SWIFT system. What the world does is allow China to host the Beijing Winter Olympics and throw Uyghurs under the bus.

Uyghurs are ready to go down fighting against the CCP. However, they are simply on their own. No one is coming to back them and as strange as it may sound, Uyghurs have every reason to envy Ukrainians despite Russia’s invasion into Ukraine.